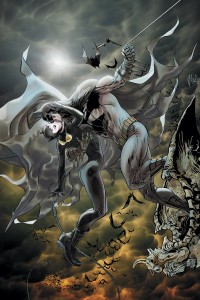 So, let’s recap the last Catwoman issue: Bras, cats, bombs, clubs, Russians, violence in a bathroom, and sex. That’s pretty much it. I was prepared to drop the title. It didn’t appeal to me and I thought Selina would be portrayed in a much more classy fashion. I don’t care that she’s having sex; a woman’s sexuality is nothing to fear, shame, or hide. However, Selina’s sexuality in the first issue of her relaunch wasn’t handled with finesse. What it was, though, was thrust in my face. People derided Winick’s use of ‘sexy’ to describe the series pre-launch, and I finally saw why.

Still, the issue was in my box today (I haven’t officially narrowed my DC titles yet) and I didn’t feel like telling the LCS owner, ‘No,’ so I went with it. Honestly? I’m upset and glad that I did. Upset because I had made up my mind before. Glad because this issue was an enjoyable read.

The first few pages are a continuation of where we left off last time, so I’m pretty much going to ignore them, besides to say I’m not surprised Bats likes it rough. Maybe not surprised about the Cat liking it rough either, not sure, jury is still out. However, at the end we have an inkling of the Bat/Cat romance I love to love, in a good way, not in a shameless way.

In this issue, we have Catwoman stealing the beloved painting of a group of Russians, mentioned in the previous issue, and setting up two rival gangs to confront each other over it. We also have Selina’s motivation for this particular heist: Revenge. You know, despite her having, apparently, clawed a man’s eye out. Another new development in this issue is Bruce’s appearance as a playboy, who apparently knows Catwoman’s identity. He realizes she is up to some shenanigans and investigates her texts and a meeting of some gun toting Russians. Selina gets him out the crossfire, and really lets her sense of vengeance show when she appears in front of the man she holds a grudge against and remarks ‘I’d like to think that the last thing Renald sees out of the eye I left him — is me.’ But, a rather awesome revenge plan and its accompanying emotions are quickly dashed when Selina returns to her current crashing spot and finds her friend dead and herself at the mercy of a villain named Bone.

It’s hard to get at exactly what was better about this issue. It just qualitatively felt better. Now, let me take a moment to not completely dash my credibility. In this issue, we have a return of Selina’s former qualities: the cunning, conniving, and agility of the Selina I love and know. I love a good thief Selina, and I got her in this issue.

Now, not everything is perfect. Selina can, of course, actually wear decent clothes that display the class she shows in her previous incarnations. So far, she has not. And apparently Winick loves Selina in a bra. I love March’s art, which reminds me of the elegance and litheness of 70s anime characters, but his art also is a very efficient mechanism for sexualization and objectification of women (which some comic fans do not object to, or else we wouldn’t have this art in Catwoman). I also do not want to gloss over the aspect of violence committed against women. It is most definitely a discussion for another day, but let’s leave this in mind: there is always a significant and qualitative difference in violence committed by men against women and violence committed by men against other men.

Anywho, social issues aside, maybe this issue should have started Catwoman. I would have had far less doubts about continuing to read the series. Now? Well, I’m pretty much okay with sticking along for the ride. I’d like to see what happens. I’d like to see a sexual, albeit handled better, Selina and a competent and capable Selina. Maybe, just maybe, Winick will deliver.

Recommendation: Buy It – A lot of people didn’t like the first issue; I say Buy this one because it may make you feel differently about the series. Some have opted out altogether, whether because of this issue or the previous. Yet, this one is different and is at least worth giving Catwoman a real chance.