WithÂ Bulletstorm, developer People Can Fly, along with parent company Epic Games and publishing partner Electronic Arts, have brought us one of the freshest, funniest, and Â most flat-out entertaining first person shooters we have seen in a long, long time. The entire game is based on a simple concept: kill your enemies in as many different ways as you can come up with. The execution of that idea, however, is phenomenal. People Can Fly have packed this game full of unique, powerful weapons each complete with a creative secondary function, while also giving you a leash to pull enemies and items toward you, a kick move to knock them away, and a megaton of environmental hazards and goodies to mix in. Each firefight plays out like a sandbox of mayhem that dares you to find yet another way to put down one of the dangerous denizens of the planet Stygia. The unrelenting originality of this game is without a doubt its finest point and the biggest reason why any and all shooter and action game fans need to take it for a spin. 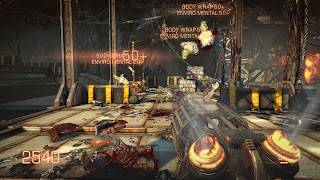 Aside from the all unadulterated fun to be had,Â Bulletstorm has plenty of other merits that it uses to set an early benchmark for 2011’s Game of the Year (let me stress the words “early” and “benchmark”; not declaring any winners just yet). While the game is certainly filled with all kinds of foul talk, vulgar references, and other varieties of toilet humor, the jokes and pokes actually come out as genuinely funny, clever, and well-written. Some lines will make some players groan in embarrassment, but for the most part, what could’ve come across as the unimaginative humor of an adolescent male actually turns out to be thoroughly amusing. Even better, the game never takes itself too seriously and the characters themselves make references to the absurdity of their own banter. Much of this banter comes out as organic dialogue while running through levels rather than just in cutscenes, a technique that gives life to the downtime between gunfights and allows the developers to keep a tight pace that never leaves you feeling like the game is slow or overwhelming.

The introductory section of the game in particular does a fantastic job of establish the setting, the characters, and even the canonical viability of the game’s combat system. While the pace is notably slower in this first hour or so,Â Bulletstorm does a good job of feeding you information and new abilities one by one, and despite some of the ridiculous stunts you’ll be pulling later in the game, it always feels grounded in a certain tangible sense of reality. As the game progresses, new weapons unlock to give you new tricks, and new enemy types force you to shake up your approach to combat. The litany of environmental hazards ready to lethally assist you never feel like they are out of place, and People Can Fly throws a bone to old-school game design with the inclusion of a few well-designed and tightly-scripted boss battles. 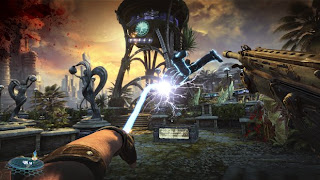 A gorgeous setting and layered backstory give an added weight to the game’s campaign, and for most of the game the characters are well-nuanced and cleverly-written, with real, believable motivations. However, the way the writers convey some of these motivations is very much clunky, and in particular Trishka–who’s a sharp-tongued, bad-ass female soldier that is refreshingly not proportioned like a stripper–falls flat as a character later in the game with cliched daddy issues. The protagonist, Grayson Hunt, is also generally a dynamic character with a complex past and well-defined motives and attitudes, but in some crucial scenes it would have benefited him to show his frustration in a more subtle way rather than stating his opinions matter-of-factly in a goody-goody tone that clashes with the rest of his mannerisms. The main antagonist, General Sarrano, also comes across as a little too over the top; he would give Hitler a run for his money on the evil meter. 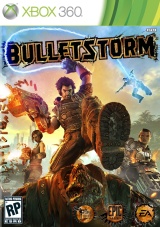 While the narrative and characters come off as hit and miss over the course of the adventure, on a technical levelÂ Bulletstorm absolutely shines. There was never a single frame drop, a single late environmental draw-in, a ridiculous lack of hit detection–nada. This is about as well-polished a game as it comes these days (a rare feat), which is especially impressed given the sheer amount of stuff going on at various points throughout the game, often on a large scale. The graphics and art design are flat-out gorgeous, all the guns feel and sound real, and the music compliments the frenetic action perfectly. The only notable detraction on a technical level isn’t even the fault ofÂ Bulletstorm at all: Unreal Engine 3’s age is starting to show a little bit when it comes to facial animation and hair, which is most notable in the game’s sparing cutscenes.

Recommendation: Buy It
Despite some narrative missteps down the stretch,Â Bulletstorm is without a doubt the most original game–and especially shooter–that we’ve seen in a good while. It’s fun, fresh, funny, and provocative; it’s a great roller coaster ride that never lets up, and from a design standpoint is incredibly well-executed. While ending is somewhat plagued by an unsavory blatant set up for a sequel, People Can Fly has nonetheless built an exciting new world that will be fun to come back to over and over again, and I can’t wait to see where the studio goes from here.