Just a little bit over a year later, the sequel to OlliOlli arrives with OlliOlli 2: Welcome to Olliwood. Not a lot of time for a sequel, so the question is: What does the sequel do that makes it a worthwhile purchase?

For those uninitiated,OlliOlli is a 2D, side scrolling skateboarding game. You do your Olli (duh!) and all your other tricks just by pressing the left stick in different directions, or doing specific motions like quarter circles. Otherwise it mostly just uses one other button, the X button to land a trick or to push yourself should you have lot speed. You can also use the shoulder buttons to modify your tricks, to rotations and to change your stance. Unlike the Tony Hawk games you are basically given a Line and you try to do as many cool tricks on it as possible. Meanwhile timing is very important as well, because if you do perfectly timed landings or hit the rail at the right moment it nets you bonus points. On top of that these perfectly executed moves will not make you lose speed. 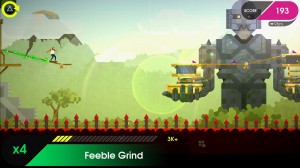 So what does the sequel do differently? Well not unlike the transition from the first Tony Hawk game to the second they added Manuals. But they did not end there they also added Reverts, Revert Manuals and Grind Switching. What those do is they expand the combo system quite a bit and make the whole game flow better. Much like it happened in the Tony Hawk series. In the first game you were mostly trying to jump from rail to rail so your combo does not get broken up, but now you have ways to keep your combo going as long as you don’t fall down. So if you are skilled at the game it’s totally possible to do the levels in the game in one big continuous combo. 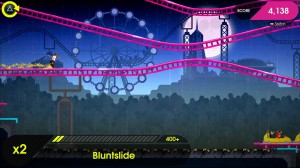 Content wise the game is also doing well. The game has 50 levels, each with 5 different challenges to beat. These can range from beating a high score, to doing a specific trick combination. And if you are done will all of those you can even unlock RAD mode which let’s you play all the levels in an ever harder version. What I really appreciate about the level design is that now they also added multiple paths to some of the levels. This means you have at least some freedom in what your Line is going to be. The art in the levels is also more varied and creative this time around. You might be skating through Olliwood one time and the next time you are in a robot factory with toxic waste around. The Daily Grind returns, which picks a random level every day and you have one try to get the high score. The other mode they added is the Spots mode in which you get small part of a level and you try to get as many points as possible on it in one combo. Again here as well as in every other mode you can compare how well you are doing with the online leaderboards, but that is almost a given these days.

What I can not comment on is the Combo Rush mode and the local multiplayer. These two modes are going to be added somewhere down the line with a patch. Don’t worry it’s going to be free. 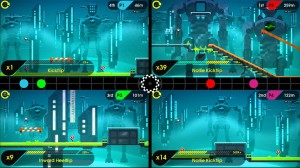 Review 6 (out of 7): OlliOlli 2: Welcome to Olliwood is a great sequel. They improved it mechanically maybe in just a small way but it makes a huge difference in how the game flows. It’s tons of fun and so rewarding when you finally beat a level in just one combo. The game might not be the easiest but success is always just a quick restart away…