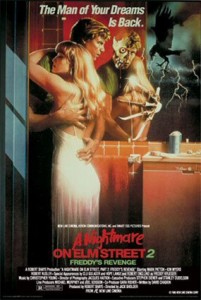 Horror films and subversion go together like, well, peanut butter and jelly. Many of my favorite horror films are the ones that subvert the audience’s expectations in order to deliver scathing social commentary or poke fun at genre clichés. A Nightmare on Elm Street 2: Freddy’s Revenge is not one of those films. It is, however, a fascinating example of how oblivious Hollywood producers can be to a screenwriter’s thinly-veiled allegory.

Set five years after the events of A Nightmare on Elm Street, Freddy’s Revenge focuses on the family that moved into the house owned by Nancy Thompson’s mother in the first film. The new family’s teenage son Jesse is experiencing violent nightmares in which he is hounded by Freddy Krueger. Freddy seems more interested in taunting Jesse than in killing him, however, and it soon becomes clear that Freddy intends to enter the real world using Jesse as a vessel.

Jesse is a far cry from our erstwhile protagonist Nancy. He’s a whiny, uncharismatic klutz whose own family seems to dislike him, showing nothing but annoyance when Jesse cries out in terror at night. When he’s not awkwardly bumping drawers shut with his tighty whitey-wearing ass or being depantsed by his best friend Grady, he’s probably complaining about how his family doesn’t understand him. Miraculously, Jesse is able to pull it together enough to sustain a relationship with his girlfriend Lisa, though it’s obvious that he’s really into Grady. 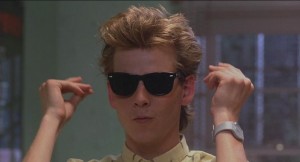 This movie has no qualms with breaking each and every “rule” about Freddy Krueger established by its predecessor. Most egregiously, each of Freddy’s victims is killed while they are wide awake in this entry. At one point, Freddy terrorizes Jesse’s family by apparently possessing their pet parakeet, which attacks them in one of the film’s most entertainingly bizarre scenes. Later, Freddy murders Jesse’s abusive high school P.E. coach by telekinetically barraging him with various balls, brutally whipping his naked body with a towel, and finally slicing him up with his claw. Afterwards, it is implied that Jesse himself might have committed the murder, but many aspects of the scene still make no sense.

Freddy eventually wins his battle of wills against Jesse, taking over his body before slaughtering a bunch of teens at a pool party in what is absolutely the most out of place sequence in the entire series. Convinced that Jesse can be saved, Lisa follows Freddy to an abandoned factory where she is confronted with horrific menaces such as dogs wearing baby masks (!) and cats with bigger teeth (!!). Truly the stuff of nightmares… Lisa confronts Freddy, and together with the power of love, prevails. Freddy is banished back to the dream realm and Jesse is saved so that he can go back to pretending to be into his girlfriend.

As I already mentioned, this movie (which received no contribution from series creator Wes Craven) almost entirely does away with the fun gimmick of Freddy only being able to murder people in their dreams. Instead, the screenplay is most concerned with cramming in as much blatantly homoerotic content as possible, in what I can only assume is an attempt to stick it to “the man” in Hollywood. In a genre so saturated by male power fantasy and T&A, it’s funny that neither the producers (New Line Cinema CEO Robert Shaye even makes a cameo as an S&M bartender) nor director realized that the film was written as an allegorical representation of a young man battling with his own sexuality. There is certainly room for variety in the horror genre, but the unique elements are clumsily handled here. 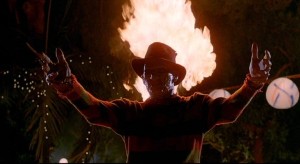 While broadly dismissed as the worst in the Nightmare series, Freddy’s Revenge is a surprisingly fun movie to watch in a “so bad it’s good” sort of way. The acting is hilariously bad, the plot developments are ludicrous, and there’s a general “what on Earth were they thinking?” vibe throughout the whole thing. Not everything is all that bad either, with some of the inventive effects remaining imaginatively gruesome to this day.  In all honesty I would say it’s a moderately entertaining entry in the series, and is especially good when watched beside its segment in the Never Sleep Again documentary.

Best Kill: Grady, who is stabbed through the chest by Freddy with so much force that the knives go through the door behind him.

Rating: 4 (out of 7) – It’s definitely the black sheep of the series, but you can still have some fun with Freddy’s Revenge.