Mad Max Fury Road Review (Or why you should all go see Mad Max : Fury Road)


I think it’s safe to say that the once proud ’action film’ genre is going through a bit of a rough patch in mainstream* cinema right now. The once proud genre that gave us Die Hard, Predator, The Matrix, Aliens, Total Recall and countless Arnie/Stallone/Van Damme films of variable quality has been reduced to the genre that gives us A Good Day to Die Hard and other PG-13/12 rated films (a remarkable number of which star Liam Neeson) that follow the same basic template. 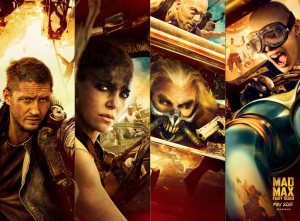 There’s likeable inoffensive leads with good screen presence capable of making one liners when appropriate that go through some sort of minor emotional arc, a completely forgettable plot that basically boils down to a flimsy excuse to tie together a series of set pieces. These set pieces then more often than not seem to think that sheer scale/spectacle is an appropriate substitute for the bloody brutality/rawness we used to have when in actual fact they work best when they’re used together

I’m not saying there haven’t been good action films here and there, some films have some good action elements to them (Kingsman: The Secret Service and Kick-ass) but the good action films are usually either self-referencing mild parodies (Hot Fuzz, Expendables 2, Shoot Em Up, Planet Terror are some of my favourite films from recent years) or the occasional Action Blockbusters (Usually involving Superheroes) that don’t feel like they belong to the same genre as the great action films of the last century. This is obviously all down to one thing – Money. It’s ‘too expensive’ to make an adult action film that automatically has it’s possible box office reduced since it’s potential audience is already limited by it’s certification and studios exist to make money. 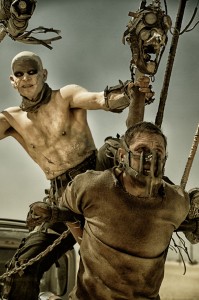 This isn’t the first attempt at a proper “R-rated” action film in recent years, that would be 2012’s terribly under-appreciated “Dredd” (which fans are still campaigning for a sequel to even now), but this is the biggest yet. I don’t know what was going through Warner Bros executive heads when they greenlit a $150 million budget R-rated action film (Dredd’s was $45 million and it still bombed) but I’m unbelievably happy that they did.

Mad Max Fury Road doesn’t have set pieces, the film is a gigantic 2 hour long epic set piece that stops every now and then to catch its breath. The film starts, revs its engines and a few times and then takes off full speed ahead and remains so for most of it’s running time.

Of course a 2-hour set piece doesn’t mean anything if the action in the set piece doesn’t excel and returning director George Miller does not disappoint at all in that regard. The action can get absolutely insane at points yet, thanks in part to some fantastical cinematography, is never hard to follow. Miller manages to combine the insane scale and spectacle of the modern action blockbuster with the physical rawness of films from years gone past and the end result is absolutely god damn beautiful film that simply demands your attention.

I could go on and on and on about how good the action is but if the last two paragraphs and my feelings on modern action films in general haven’t convinced you then I fear you could be a lost cause.

Away from the action Miller does a fantastic job of making the film feel both modern yet true to the original trilogy of films from 30 years ago. The tone is the same feel of the The Road Warrior’s absolutely over the top epic apocalyptic insanity (and avoids the more cheesy feeling of Beyond Thunderdome) and it honestly feels like this is the kind of film that would have been made if Miller had the resources available to him 30 years ago that he has now. Once again Miller and his crew create a magnificently realized post apocalyptic hellscape whose beauty and design shines throughout the whole film both in the look of the world and it’s inhabitants. (Personally I loved the guitar player following the bad guy army just playing riffs in front of a wall of amps with flames coming out of the guitar) 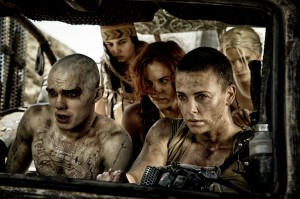 Tom Hardy’s take on Max feels like the same Max from Road Warrior, a driven man of few words clearly holding back something deep within (Which makes me wonder about these MRA’s complaining that Max is marginalized in his own film…did they even see Road Warrior? I seen it last Wednesday for the first time and he didn’t have much to do in that film). Charlize Theron and Nicholas Hoult both get a few moments to shine and lead a well utilized supporting cast whom all get to help out at least once in the action.

Like the classic action films of the past there’s not so much a ‘plot’ to the film as much as a premise but even that is smarter than you’d expect and manages not to feel like a rethread of former films in the series. Anyone that wants to dig deeper will find some a goldmine of gender tropes being overturned and feminist undertones but even if you just want to take it at face value it’s still enjoyable. 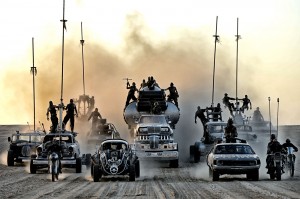 But the classic action films of the past aren’t about character arcs or plot, they’re about the action. It’s the most important part of the genre and Mad Max: Fury Road absolutely gets it, and a hell of a lot else, completely right.

Review 6 (Out of 7) – There’s a lot of reasons to go see Mad Max; to support more films like it and show there’s a market for proper action films from Hollywood that aren’t rated 12/pg-13, to piss off MRA’s and support what people are calling a “feminist blockbuster” but more than anything else, you should see it because it’s a genuinely great film and we need a lot more like it.