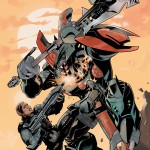 Microsoft is intent on expanding the Halo universe for better or worse, and some of this expansion will be met with disregard and apathy by the community. Going into Halo Initiation 1, I felt the same way towards the book. It’s a stop gap between Halo 3 and 4, and serves as a lead-in to the Halo mobile game, Spartan Assault. Why was it needed and why should I care?

Luckily, this comic was able to prove its worth by the end of the issue, though it is not without its hiccups. Since this is a tie-in to a large universe, with several games at this point, the start of the story does spend a lot of time with exposition. We are told about the Spartans program, we get caught up to date with the fact that Master Chief is missing, and now Earth needs new guardians to protect them.

Enter the Orbital Drop Shock Troopers (ODST), and Sarah Palmer, our lead for this adventure. Now I shall be perfectly honest, I’m a fan of the Halo games, but don’t necessarily pay attention to its story beats. Sarah Palmer is a character from Halo 4, but for the life of me I can’t remember what role she played in the game. Which I find helpful in this case because I ultimately don’t know what her character arc will amount to, other than the fact that she should be alive at the end.

Sarah and her ODST squad are introduced as they launch a rescue of a scientist who is on the run from a local facility that is under attack. In fact, it was one of the pleasant surprises of the books to see the return of the gravity hammer-wielding Brute, who without a Master Chief is able to do some massive damage.

This is when the book has its one and only action setpiece, but it is done well as the stakes don’t really escalate much, but the players become larger and more dangerous. The conclusion of which is a really nice touch for players of the game.

The story then settles down once again to focus on Sarah Palmer, and move us into the next leg of the story. It isn’t the most drastic or dramatic ending to a comic, but the first issue was solid enough where I do want to see where the story goes. And it’s only 3 issues. 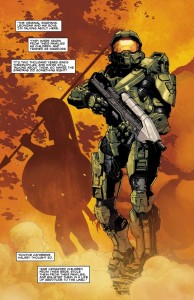 The art in the book is more of a mixed bag. Most of it seems to be drawn well, and has decent color usage, but it lacks a certain type of spark. Viewing some of the pages, feels just like that, its an image that you need to glance at to progress, but it doesn’t hide any depths or secret to the story telling. It doesn’t enhance the book in a meaningful manner. This is also very apparent during the first 1/3 of the book, which makes sense since it is a bunch of people sitting around a conference room.

It does liven up a bit when the Brute attacks. Some of his close-ups and facials are really menacing. There’s no reasoning with him or remorse, there’s just anger and a hammer in his heart.

Color usage is also a bit off-putting. One thing that the Halo franchise should always be given credit for is creating a world that is full of very vibrant colors. This book doesn’t really capture it. Instead a lot of it is darkened in the dusk light or fought in the shadows. It never really gives you the world you’ve come to know from Halo. Granted, it may help the story, but I do hope they open up the color palette in the future.

Review 4 (out of 7) – This is a solid read. It helps build the character of Sarah Palmer, but this is completely an introductory comic. It spends a lot of time on exposition than one long fight sequence before ending on a whimper of a cliffhanger. I recommend reading it because the series does show potential.Â