Ah! After ten thousand years I’m free! Time to conquer– wait, what? I’ve only been frozen in that block of ice for a little over three years? Well then dear adventurer, I guess I can put off some mayheming and help you out. And boy do you need it. You look like a bulimic skeleton. Wipe that puke off your face will ya? There, now you look like a proper bag of bones. Let’s pump you up like only WWII era super science can. We’re gonna to make some 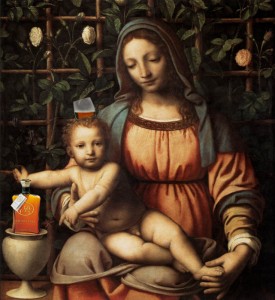 According to legend (and wikipedia) in 1525, a Saronno church commissioned artist Bernardino Luini, one of Leonardo da Vinci’s pupils, to paint their sanctuary with frescoes. Since the church was dedicated to the Virgin Mary, Luini needed to depict the Madonna, but was in need of a model. He found a young widowed innkeeper, who became his model and hanker of panky. Out of gratitude and affection, the woman wished to give him a gift. Being strapped for cash, she steeped apricot kernels in brandy and presented the resulting concoction to Luini. And thus Amaretto was created. Time travel to 16th century Italy and go steal it off that drunk-ass artist. Bammo! You got the first ingredient. (Fun fact: Steve Rogers is was an art student before becoming the winghead he is today. He still can’t draw noses well.) 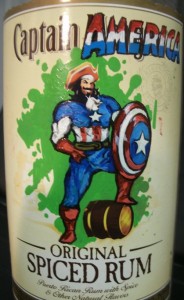 Off to the Caribbean! It’s a pirate’s life for you.
It’s one thing to steal from a scrawny church scribbler.Â  It’s another to steal from a blood thirsty pirate. And that’s exactly what you’re gonna do. Jump ahead in time to 1669 (or wait it out in a block of ice, it’s awfully refreshing) and board Captain Morgan’s flagship, the Oxford. After their raid on Cartagena there was much rum-filled celebration. Distract the good Captain and swipe his rum. You now have the second ingredient. Get off that ship as quickly as you can, for in all that drunken merriment, explosives were accidentally set off and the ship was destroyed. True story. (Fun fact: According to the miniseries Captain America and the Falcon, Captain America actually has the effective authority of a one-star general. Brigadier General America just doesn’t have the same ring to it.)

Head north to the good old U.S. of A. You’re gonna catch yourself a turkey. A wild one that is. Milk it. You heard me. Congrats 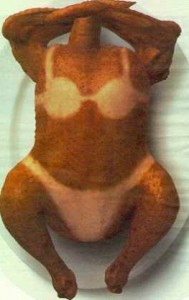 you have the third ingredient. Wash your hands. (Fun fact: Captain America enjoys nipple play. Ok, that one I made up. But he seems like the sort doesn’t he?)

What’s more American than turkey milk? Why cranberries that is. You probably contracted some sort of urinary tract disease during your time traveling adventure anyway. Cranberry juice should help. Raid a mini-mart! Slink past Patrice the cross-eyed cashier. Be careful, for who knows which eye watches what. Dodge Brutus the octogenarian security guard. Plug your ears from the deafening siren song of the security system. Do battle with Sir Cartsworth, the shopping cart that just happened to get in your way during your escape. Or you know, just buy it. Whatever. (Fun fact: Captain America stole Arnim Zola’s son, Ian, from a test tube while trapped in Dimension Z. Not quite exactly the same as swiping some juice.) 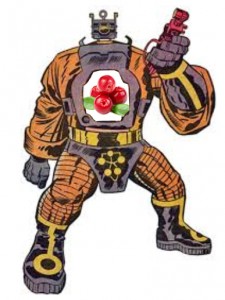 Shake ingredients in a cocktail shaker. Strain into glass or test tubes. For oral ingestion only. Injecting is not advised.