Peter Parker is back and continues to deal with the fallout from being mind-swapped with Doc Ock. I lost track of how many times this issue had me laughing out loud. Peter finds himself in some awkward situations as he has a talk with Anna Maria about who he really is and what has been going on the past few months and visits the Avengers who aren’t sure whether or not to trust this wall crawler. We also get our first tease of Silk who will be appearing in the Amazing Spider-Man Original Sin tie in! She seems pretty cool based on the posters hanging in her room, looking forward to seeing her character being developed more. Â Also we get to see Peter and Johnny Storm reunite in this issue!

It’s pretty unfortunate for Peter that Doc Ock not only 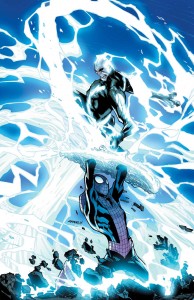 messed with Peter’s personal life but also his vigilante life. Ock deciding to experiment on the “Superior Six” is really going to catch up to Peter because I’m pretty sure that Electro won’t be the only one whose powers are on the fritz. But hey, that’s the Parker curse right?

In this issue we also witness Felicia Hardy stalking the Spider, looking for revenge on him for what the Superior Spider-Man did. It will be interesting to see Peter deal with the relationship dynamic shift between the two. And I’m sure we won’t have to wait very long until the Black Cat pounces.

The artwork is amazing. Ramos is my absolute favorite Spider-Man artist. He was the reason I bought my first Spider-Man comic back in the early 2000s when he was on Peter Parker: Spider-Man. I saw his art on the cover and instantly fell in love with the way he draws him, it really fits Peter (and Spidey’s) personality.

Rating: 7 (out of 7) — Dan Slott writes Peter perfectly and the art is gorgeous. Plus some cool things are set up in this issue, what’s not to like?

For my review of Amazing X-Men #7 swing over to page 2!