Tales From The Con #1

If you frequent the Emerald City Comic Con website, then you may already be familiar with Tales From The Con.Â  This title premiered as a web comic on their site back in 2012.Â  This issue put out by Image collects the first years worth Tales From The Con web comics with some bonus material. 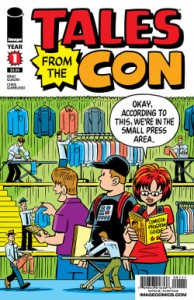 The premise to this comic is probably what you’d expect it to be; silly and exaggerated (but not by much) short comics about the Con experience.Â  The perspective of these comics go back and forth between con-goers and comic professionals, as well as between one panel and multi-panel gags.

The comics also vary greatly in scope.Â  Though the tone remains consistent, in great part because of Chris’ style and strong understanding of the medium, the comic jumps back and forth between making a thought provoking observation about geek culture to a silly, sometimes groan evoking, play on words.

The choice for the cover image happens to be one of those groan evoking moments I was mentioning.Â  I’m actually surprised it made the cover.Â  I think with the choices they had available, they had better jokes to work with.Â  For me, the cover highlights one of the weakest jokes in the comic.

If you also find yourself a little confused as to why that joke made the cover; don’t let it discourage you.Â  It gets better.Â  Way better.Â  As I stated before, Chris Giarrusso is really a master of his craft.Â  I’ve seen him at conventions before and have a few sketch cover commissions from him.Â  He does a great job and is very reasonably priced so if you see him at a convention doing sketches you should hit him up.

Brad Guigar does compliment Chris Giarrusso’s art nicely with his musings.Â  One of my favorite one panel bits is about a panel starting up where the speakers talk amongst themselves about how packed the room is, only to realize that it’s because people are there waiting for a later panel.Â  It’s a quick, funny panel that really hits a hard to solve problem at many of the bigger conventions.

I really do feel these guys work really well together.Â  I’d be interested in seeing them collaborate on other kinds of projects in the future, if the opportunity arises.

Score: 5 out of 7.Â  Overall this comic has many more funny bits than duds.Â  It may have worked better as a web comic seeing these strips pop up over the course of a year than to go through them all at once, but most of it still works.