The Burden of Knowledge

Have you ever wondered why the picture of a completed puzzle is on the box? You probably haven’t. It’s a given that you should know what the completed image will be. Because if you don’t know what it’s supposed to look like, you won’t actually know if you’re on the right track.

Why do I bring this up? Because sometimes as an audience we bring the completed puzzle to the table, and assume that everyone has seen it already. 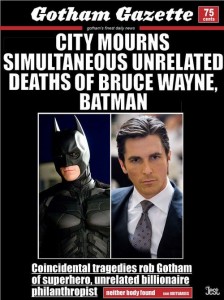 Recently, the above picture has been making the trip around social media websites again. It was one of the “criticisms” of The Dark Knight Rises, “How Does No One Notice That Batman and Bruce Wayne Both Died!” and on paper, it may sound fine but once you give it any type of thought the argument crumbles quickly. While this article isn’t intended to tear that argument apart we do need to provide examples to get the ball rolling. Â Just a few counters, 1) Very few people knew about Bruce Wayne’s appearance or disappearance in Gotham while Bane had the city under siege, 2) More than Bruce Wayne died that day, we know of Bane and a few cops and 3) We don’t really know when the story got out that Bruce and Batman died. Who’s to say it was the same day?

Now for the point of the article. As an audience, especially when it comes to adaptions, we are privy to a certain amount of information that isn’t free to the characters. Going into the movies (long before The Dark Knight Rises), we know that Bruce Wayne is Batman or Batman is Bruce Wayne, whichever way you want to see it, so it’s easy for us to see his coincidental death and wonder why no one else is picking up on this obvious thread. It is our own personal burden of knowledge. Information imparted on us that sometimes does color our impressions of the world we are watching.

This “burden” as it were can also dampen a property’s “tension.” And this is a problem a lot of prequels run into. We really don’t feel a lack of concern for characters we know HAVE to survive in order for everything to make sense or a character who needs to die or turn sides in order for events to match-up to what will NEED to happen. 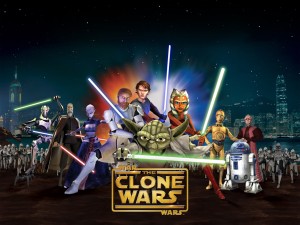 Recently, I’ve been checking out Star Wars: The Clone Wars because it is on Netflix. And while it is a good show, a lot of the dramatic tension is lost because I know they can never kill Anakin or Obi Wan so whatever mishaps they get into will be solved eventually. The same thing with their continuing cat and mouse game between our Jedis and Count Dooku because we know they will never catch him. As a fan of the Star Wars verse, I do lose out because there can never really be any drama in it for me.

At the same time, the burden doesn’t just extend to fans but creators as well. Take one of the more infamous prequels in recent memory, Wolverine: Origins. As fans, we know what state Wolverine is in at the start of the first X-Men movie so how do you get your lead into that position while making an interesting movie? You don’t! You craft a magic bullet that allows even the laziest of plots to work “naturally” into where the character needs to be.

Sometimes, the burden is something that is needed and not necessarily welcomed. Take Marvel’s Agents of S.H.I.E.L.D which really does rely on the audience checking out Marvel’s Cinematic Universe to fill in the blank for certain events on the show. It’s a burden than extended beyond any scene or exposition presented in this universe.

I guess the point of this whole ordeal is it is sometimes difficult to remove foreknowledge from your thoughts, but that shouldn’t come at the expense of your enjoyment. Take things as they are presented to you, and only question it when it doesn’t behave by the logic established in its own unique way. Like how those kids were able to retrieve Spider-man’s mask in Spider-man 2 after he clearly tosses it while outside the train. Seriously, it has been 10 years and this still bugs me! Someone explain it!