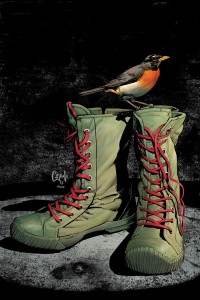 First off I want to say that the cover for this issue is beautiful. We get a very simple but emotional cover. You know the saying a picture speaks 1000 words.

Now if you do not read Batman Inc and have been hiding from comic book news this could be a bit confusing of an issue. We just wrapped up Death of the Family last month and now we are exploring an issue coping with death. This is part of a cross over. Batman’s son aka Robin died in the last issue of Batman Inc. We now see how Batman is dealing with that, and it is not good.

I finished reading Batman & Robin 18 before reading this. The emotional silent issue explores the pain Bruce feels from losing his son, Batman 18 shows us how he is dealing with that pain. This is Batman like we haven’t seen him before, clearly defeated and taking risks he normally would not take.

We got more Harper Row in this issue which is always exciting. Now while she isn’t truly a Batman sidekick, I will say she would be my favorite Batman sidekick if that ever happens. It starts off with Harper and her brother Cullen going to Blackgate to visit their father. We can see that they both have had a hard life. Their dad is in jail their mother is dead and they live in a child care facility. We get the see how much of a jerk their father is and how that has made them build up a wall. Even with this hard life, Harper is still trying to find Batman after she saved him back during the Court of Owls.

Meanwhile, Batman is literally beating crimals bloody. He leaves a pile of crooks for Gordan to deal with. We get the sense that he is taking all of his fustrations out on these lowlife criminals. 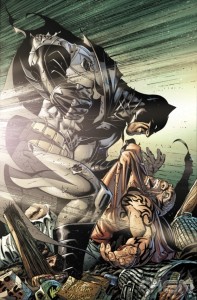 Harper revels that Batman may be capturing a lot of people but he hasn’t slept in five days and there are even reports of him our during the day. She is concerned because he is slow from lack of sleep and if a worthly foe were to present itself Batman could fail. He is having trouble with this normal crooks if he tried to stop someone else there would be a good chance he could die.

Pretty soon Batman encounters just that type of foe. A man who releases venom injected dogs with shark teeth on Batman. As much as he tries Batman is to slow and quickly gets overwhelmed. Good thing Harper was still tracking him and uses her shocker to save him. Harper 2 Batman 0! She can see the pain in his eyes and knows that he has lost someone, she once had that same pain in her eyes when she lost her mother. She tries to talk to him but he won’t listen and he punches her in the face and leaves.

The next day Harper insists on meeting Bruce Wayne because she knows he helps fund Batman. She wants him to look at her blueprints and have him send a message to Batman. Later that night she finds Batman and he apoligizes to her. He thanks her for her help and she tells him “Batman doesn’t get to die” she reminds him that he is a symbol to Gotham. He then tells her that his team will watch the city tonight while he finally gets some rest.

For many this issue may be forgetful the longer Synder’s run lasts. We got a powerful issue showing Batman acting very much like the human he is. We all try to run or distract ourself from our problems and this is exactly what Bruce is doing. He is focusing on “work” and putting the “problem” of his sons death behind him. This leads Batman to being very vulnerable and does not allow him to see that he could be making some very costly mistakes. It takes a very brave girl to remind him that Batman can’t make mistakes and risk his life. He needed someone like Harper to remind him that Gotham needs him.

Overall, BUY BUY BUY Batman #18. First off the cover is just awesome. Second Harper Row is a great character. She is very interesting and I’d like to see her become Robin! The emotion of her saying Batman cant Die and he is a symbol to the city was very powerful. Finally we get to see Batman acting like everyone of us would when we lose a loved one. This showed us even the strongest can break down from time to time.

Let me know your thoughts in the comments, or on Twitter (@joshraj9).