A-Z of Geek Cinema: H is for Hamlet

We need to talk about Shakespeare.

Well, not really. I just liked using that as an opening line. Instead, let us talk about what many consider Shakespeare’s greatest work, Hamlet. Specifically, the adaptation of such to film. There’s been quite a few, really. From Olivier to Branagh, Mel Gibson to Ethan Hawke, the Bard’s melancholy Dane has attracted quite the murderer’s row of leading men. And that’s not even considering things like the recent BBC production of the Royal Shakespeare Company’s performances of the play, starring David Tennant and Patrick Stewart. The play speaks to people, and thinly the movies do as well.

But why Hamlet? What is it about the play that draws these men in? It’s a meaty part, that’s true. Hamlet is either on-stage or talked about in pretty much every scene. The number of different versions of the Danish Prince one actor has to play is astounding as well, as Hamlet the character goes through a lot of different permutations. So how do you play it? Maybe that’s what the attraction is, the difficulty, the challenge.

The main issue when adapting Shakespeare, and Hamlet in particular, is what do you cut? If filmed in its entirety, the play should theoretically take about 4 hours. Stage productions routinely cut scenes, move things around, edit edit edit. This has been the tradition since the time it was first performed. Any play, really, is in a constant state of flux. Movies, on the opposite tip, are concrete. They are set in stone. So the choices have to be made as to what to cut out just to fit a “normal” run-time. Olivier accomplished this by narrowing the focus on the title character to “a portrait of a man who could not make up his mind.” The Gibson-starring Zeffirelli film shortened the timeline and composited characters to make a sort of “Cliff’s Notes” film. The Ethan Hawke version had less of an issue with this, as it was set in the present day and changed things to suit its time frame and mode. Only Branagh’s epic in scope version attempted to do the play uncut, though apparently there was still some things left out. 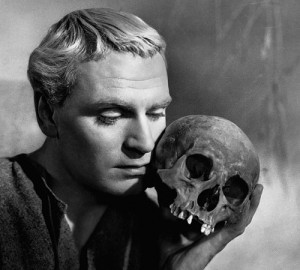 Again, there’s something that brings people back to this play though. In black and white, in actual castles, in a Manhattan high-rise, in a non determinate early 19th century palace, the Bard’s words echo. “To be or not to be?” they ask, “That is the question.” The uncertainty of the character, the obvious intelligence and quirky humor, the palpable anger at times, it all adds up to a nuanced and almost real human being. And maybe that’s the thing: Hamlet is a real person in fiction, a human being composed of words and text. He asks the question, and everyone answers, “To be.”