The Man of Steel Problem

Spoilers for The Incredibles 2 included below.

After the release of Man of Steel in the summer of 2013, fans unwittingly opened up a Pandora’s Box that creators have been trying to shut for the past 5 years. A brief refresher, if you don’t remember and god bless your soul, a lot of push-back came from the destruction caused during the climax of the film. As the weeks and months went on, it became a big talking point around the movie. It cast a large shadow that many comic book movies since then have had to address it.

In the past 5 years, we’ve seen it in the MCU with films such as Avengers: Age of Ultron and Captain America: Civil War, DC tried to cover it with Batman v Superman: Dawn of Justice and most recently, The Incredibles 2 bought the issue to light.

And after five years and so many movies, do you know the answer they’ve all provided? Me either! See it’s one thing to acknowledge that there’s a lot of property damage and destruction in these battles, it’s another thing to offer an answer that makes sense and would allow you these large scale battles. So the writers, directors, actors and the sort have had to address a perceived issue from the audience, but have been unable to find a suitable solution for the problem tackling.

The Avengers: Age of Ultron tried to address it by having the heroes literally discuss the problem during the climax while rescuing everyone they can. And when it becomes too difficult, they just find an easy out thanks to Nick Fury. This partially works though it does hamper the momentum of the climax a bit. The problem comes with the follow-up as the Avengers do eventually have to drop the land mass which is massive and permanent damage, and as we would learn a year later there were deaths that were important to the narrative of Civil War.

Captain America: Civil War and Batman V Superman: Dawn of Justice attempt to answer it in the same manner, which is to ignore the problems completely by shining a big, bright spotlight on it. They have their big battles in areas that are already abandoned. In Civil War’s case, Iron Man has the airport evacuated before the fight begins and in BvS, Batman picked an abandoned part of Gotham to do battle with Superman. These are solutions that try to allow the heroes a giant playground to wreck shit, but honestly only answers the death toll question and not the overall level of destruction done.

Like Age of Ultron, it also does make parts of the movie clunky as we need to make sure someone makes reference to the fact that the area is void of other humans. 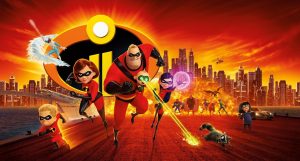 Finally The Incredibles 2 came along, the first one is a brilliant film that depicts the age of superheroes well. So when the movie started with the family causing a great deal of destruction in their home city and being scolded by the government, I thought we were finally going to get a smart and measured look at collateral damage. And then the film does nothing with it… like at all. The only real point made out of it is why they chose to go with Elastigirl over Mr. Incredible in the first place. Other than that, the movie makes no effort to try and confront possible destruction caused by constant superhero battles. Much like Batman v Superman and Civil War, it simply ignores the problem by putting the final battle away from a civilian population.

Pandora’s Box is open, and I honestly believe that no one has a take that will absolve their universe and movies from these problems, I am happy they are trying to address it, but feel that by addressing it only shining a brighter spotlight on the issue. Perhaps, it is time for the capes to just do what they have to do and hope that everything sorts itself out.