First of all I must preface this section by saying that this was my first real video game conference, I haven’t been to an E3 or PAX before, so I couldn’t really compare them. That being said here we go!

Saturday morning, the day of the conference, was filled with excitement and dread. Excitement for possibly seeing huge announcements in person and dread at conceivably being locked out by being too far back in line. In reality, neither took place as there were plenty of seats or standing room for everyone who lined up and the rumored huge announcements never transpired. It honestly was probably a better experience being at home as the room was so huge that there was an echo whenever anyone was talking, making it hard to understand what they were saying. 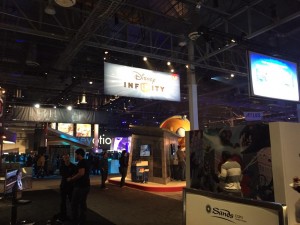 About halfway through the keynote people starting getting up and lining up by the dividers separating the hall we were in from the main convention hall. I thought this was strange, but I ambled over as the keynote was winding down. When they let us into the convention floor it was like walking into a video game amusement park. I’d imagined just lines of consoles with games to play, but that wasn’t exactly how it was set up. There was a giant inflatable dog from Adventure Time with 2 consoles to play a new Adventure Time game. The huge bar (yay for 7 dollar Bud Lights!) was mostly composed of MLB 14 stations, creating confusion as many wondered why so many people were lining up to play a game that was over 6 months old. There were literal mascots walking around, like you’d see at Disneyland: Sackboy and the new Little Big Planet characters, a Fat Princess, and a shirtless guy with Kratos makeup. People were taking pictures with them, but I chose to maintain my dignity and move on. 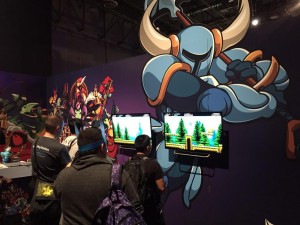 Trying to decide what to do at the show was challenging. There were tons of games to play, panels to go to, lines to stand in, and places to sit down to eat some pizza (the pizza was actually good! Horrible for you, but tasty.) As chronicled already, I mainly checked out the indie games, but I did see some first party and AAA games. My favorite was Mortal Kombat X. I had just downloaded Injustice, as it was free on PS+, and I played MK9, but I was extremely impressed with Mortal Kombat X. From the character design to the UI and the graphics, this seems like the best Netherrealms game to date. If the story turns out well, this could be one of my favorite games next year.

As the first day was winding down, excitement for the “Night Under No Man’s Sky” presentation that would occur at 9pm was growing. No Man’s Sky is the game I’m most looking forward to, and I was expecting an hour of gameplay with some cool music in the background. That’s not what we got. It was really just a concert with No Man’s Sky as a visualizer. There was apparently new footage interspersed throughout the show but it was hard to tell. On the bright side, 65DaysOfStatic really surprised me. When the game eventually comes out, the soundtrack is going to make a huge difference, as the band’s sound is instrumental and relaxing yet at times gets extremely exciting, perfect for a game about exploration. I’m still nervous about No Man’s Sky and was hoping to play it in Vegas, but I’ll be giving that game the benefit of the doubt right up until the point that it disappoints, which hopefully it won’t. 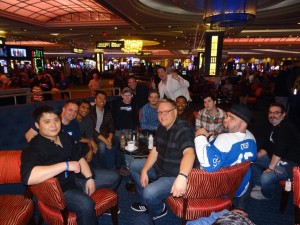 After the concert some fellow gaffers (NeoGaf members) decided to do a meet up at a nearby bar/restaurant. I was hesitant at first because meeting people you’ve only talked to on the Internet is bizzare and something I’ve never really done. After getting the awkward “are you on GAF?” and “What’s your real name?” questions out of the way, we were about 8 strong and headed to the bar. Apparently Adam Boyes, who works for Sony, and presented at the keynote, mentioned wanting to meet up with us, but I was doubtful he’d actually come. I’m sure he was tired and had much better things to do with much cooler people. Despite my doubts, he showed up! We all said hello and I was anticipating him having a drink and heading out, which still would have been one of the highlights of the show for me. But no, he brought along a few other Sony compatriots, like Gio Corsi, who also presented at the keynote. We had a sizable group developing so we decided to take a quick jaunt to the casino bar, so we could sit down and hear the blessed sounds of slot machines around us. As we were walking towards the casino Michael Pacther of Wedbush Morgan, an esteemed analyst who is very good at getting predictions incorrect, walked by and started talking to Adam. We all circled around and I got to shake his hand remarking, “you are much taller in person.” He responded with “Maybe you are just short,” touché (to be fair I’m about 6 feet), as he was walking away I asked who he thought would win the November NPDs. Basically who sold more consoles, Sony or Microsoft. Pachter said it was Microsoft that came out victorious, a good sign for Sony, but I went up to Gio Corsi and prodded him a bit with Pachter’s prediction, which Gio nonchalantly dismissed.

We sat down at the casino, now with about 14 or so people in our group, peppering Adam and the Sony guys with questions about the convention, the keynote, and some games that were missing (Crash Bandicoot, The Last Guardian, etc.) All of the answers were considerate but dismissive, not that I blame them, but everyone was super nice about talking to us nobodies. As I thought the video game portion of the night was ending, John Vignocchi walked up. If you haven’t heard of John, he works for Disney Interactive and has appeared on Giant Bomb a number of times. He sits down next to me and we start talking about the show, Disney Infinity, and Salt Lake City, where I live and a lot of the people who make Disney Infinity work so he’s there often. Oh yeah, Dave Lang was there too. Meeting people you’ve talked to on the Internet is weird but I recommend it, and at least give it a shot (but make sure it’s a safe place like a bar or restaurant). Overall, I had a ton of fun, met really cool people and will definitely be there next year. Thanks Earl for letting me spew this opus onto the great Internet plains.