Dark Horse releases issue #5 of the new Star Wars series this week, picking up with Luke, Han, Leia, and the rest of the crew, right in the middle of some important moments in the Rebellion. Taking place shortly after A New Hope, the Rebel Alliance is scouring the galaxy for a new location for their home base, Vader has caught the scent of a Skywalker and is determined to find Luke, and Han and Chewie are stranded with some well-known bounty hunters just moments behind them. 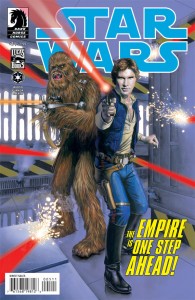 The same creative team returns for issue five, hence I’ll be saying a lot of the same here, regarding art, so bear with me if you’ve read my reviews of the previous issues. Overall, the art is very good. It’s consistently a little busier than I’d like, using more stray lines for texture and parallels for shading than I think is necessary, but the pencils produce some interesting images and the inks add a welcomed, heavy presence. The frames are all standard, never venturing from the typical rectangles, but there are some great full (or mostly full) page moments, especially the final page, depicting a haunting and ominous Vader set against the emptiness of space. The colors are really what stand out for me, however, and very much help to make the battles and explosions during tense moments come to life, adding a great depth to the images.

The writing remains nearly as solid as we are used to from this series, but there is a bit of a dip in this issue. Overall, the issue is very action-oriented. Explosions, X-wings speeding about, lots of TIE fighters chasing them, near misses, definite hits, and their common ilk are pervasive throughout. Unfortunately, through all the action, I occasionally find myself a little confused. There are a lot of allegedly advanced skirmishing and strategic concepts being employed, but I end up getting lost. An example (including a very small spoiler) would be a group of prototype Empire fighters plan to get past an area explosion of missiles by increasing speed to the point that the projected location of impact would be behind them. Logically feasible, I suppose. However, these “advanced” prototype fighters speed up and then… explode… a lot. Now, while that seemed like a legitimate(ish) idea to begin with, either the squad leader didn’t consider things properly or the fighters didn’t perform as they should. Either way, scripting a bunch of allegedly top-level pilots maneuvering allegedly next-generation fighters directly into a multiple-missile explosion seems a bit weak to me.

Anyway, while there are definitely moments I’m perplexed by the action, it’s true that exposition and still frames have also never been the easiest medium to convey theoretical methods of space combat, so it’s hard to be too upset about it. I mean, it’s a physics/strategy qualm, it’s not like they cloned the Emperor… again. More than anything, this issue clarifies a little more of the situations for each of the sets of characters on their separate missions, and does a decent enough job at it. One of my personal favorite characters in the Star Wars universe makes an appearance and the length to which the Rebel Alliance may be compromised becomes even more extreme. While not a lot of plot happens amongst the explosions, I feel this issue has set up the coming events, so I’m interested to see what’s next.