When Shin Godzilla (AKA Godzilla Resurgence) was originally announced in late 2014, it was difficult not to be skeptical. After all, Western filmmaker Gareth Edwards proved earlier that same year that a quality Godzilla movie could be produced outside of Japan, so the announcement of a new Japanese-produced title initially seemed like a cash grab. Fortunately, the Japanese producers at Toho made the inspired move of hiring Hideaki Anno – a man primarily known for anime – to direct, and he would go on to create one of the most unique and successful entries in the entire series. 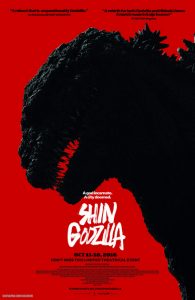 1) Glengarry Glen Godzilla – Shin Godzilla is, without a doubt, the wordiest Godzilla film ever released. While one would not necessarily associate rapid-fire exchanges of dialogue with a kaiju movie, writer-director Anno does an admirable job of channeling his inner Aaron Sorkin to establish the chaotic atmosphere within the government buildings where much of the movie takes place. The portrayal of government officials borders on satirical while showing just enough empathy toward those working thankless jobs in the face of unimaginable disaster. While the film is rather dark in tone as a whole, moments of humor are derived from its snarky take on politics.

2) God or Gorilla-Whale? – Shin Godzilla acts as a full reboot for the Japanese series. While previous reboots and standalone films referenced 1954’s Gojira, this movie is set in a world in which monsters have never attacked Japan. In what could possibly be an attempt to merge the series’ branding between East and West, the iconic monster is initially named “Godzilla” within the film, with the explanation that the United States had knowledge of the creature before Japan did, and thus were able to name it whatever they wanted. The Japanese characters still refer to the monster as “Gojira” as a loose translation of the name, however.

3. Long Live the New Kaiju – Throughout the movie, it is heavily implied that Godzilla is a creature whose entire existence is defined by physical anguish. Godzilla painfully lurches throughout Tokyo, often writhing in torment in its simple-minded mission to feed on nuclear energy. The sight of the agonizing monster, whose devastating attacks are often unconsciously self-defensive, will no doubt make audiences sympathize with it. This element gives Shin Godzilla an unexpected feeling of “body horror,” with the monster as a symbol of bastardized, undesired evolution who simply does not belong on this planet. 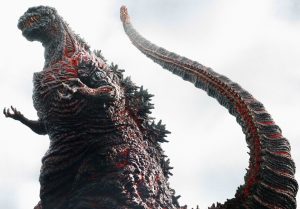 4. Neon Genesis Godzilla – Director Anno’s most famous work is the anime television show, Neon Genesis Evangelion (a personal favorite of mine), and Shin Godzilla often pays homage to it in unexpected ways. Parts of Shiro Sagisu’s score, for instance, evoke the apocalyptic dread that Evangelion was famous for, while others directly sample tracks from the anime. There are other thematic similarities as well, and while this isn’t the first time the series has paid homage to the anime classic, the references are incorporated in a way that feels perfectly organic and helps to establish a new identity for the series. The connection is so strong that I would not have been surprised at all if Godzilla had unleashed a cross-shaped blast of nuclear energy into the sky.

5. Stick with the Practical – My biggest complaint about the latest Godzilla movie is its inconsistent use of CGI. There are moments where the CGI looks no better than some of the shoddy effects used in the “Millennium” series of Godzilla movies 12+ years ago. The first time Godzilla rises from Tokyo Bay should be an awe-inspiring moment, but the distractingly poor CGI ruins it. Shots of Godzilla slowly stomping through Tokyo work far better, likely due to a combination of CGI and practical effects, but the movie always has a bit of a low budget feel to it. Design-wise, the new Godzilla is a roaring success, with a creepy, toothy appearance that bears little resemblance to his forebears. 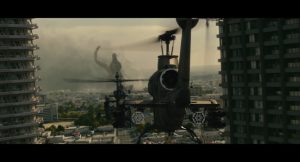 6. I’m Afraid of Americans – Shin Godzilla is as much about international politics as giant monsters, and the USA plays a prominent role in the story. The film often deals with the frustration experienced by Japanese government officials who are at the mercy of the Americans when it comes to dealing with a threat that requires military action. Japan depends on the support of the Americans, who have their own questionable agenda, and as is the case with foreign films, the Western superpower doesn’t come across all that well.

7. Unexpected Optimism – Japan has faced many political and societal problems in recent years, and the country is still reeling from the tsunami and subsequent Fukushima nuclear disaster that occurred in 2011. The unfortunate pair of events shone a glaring light on the unpreparedness of the government to handle such a situation, and Shin Godzilla does a brilliant job of drawing parallels to the tragedy. Unexpectedly, the film has a mostly positive outlook toward the men and women facing a literally evolving threat, and collaborative efforts are celebrated throughout. Nationalism is a touchy subject these days, and while Shin Godzilla posits a world in which Japan finds a new identity through unilateral effort, it mostly feels optimistic.

Review 6 (out of 7) – Shin Godzilla is a captivating film filled with emotionally-charged sequences of monstrous devastation. It’s a proud return-to-form for the Japanese Godzilla series, which should have no trouble co-existing with the more bombastic American Godzilla series.