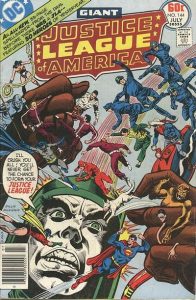 As told to Green Arrow.

In addition to that, the origin tale is focused around Martian Manhunter’s first encounter with the people of Earth in his Martian guise so while he is a part of the story, he isn’t necessarily represented as a member of the “team.”

With that said, it leaves our core team as being Batman, Robin (making his debut in their origins), Superman, Wonder Woman, The Flash and Aquaman. Though even that’s a misnomer since the story is broken up in such a way that no one team really gets a focus, but they are the final team and the ones who decide to form a “League.”

And yes we did say teams, as there are a trio of teams in this book. There’s a segment that features a team-up between Plastic Man and the Blackhawks as they chase down what eventually turns out to be Rip Hunter on one of his time travel expeditions. Then there’s the oddball team made up of Vigilante, Robotman, Lois and Jimmy, Congo Bill and Congorillo. They end up chasing around a mysterious figure that they never identify, but audiences get to know is Adam Strange teleporting to Earth. 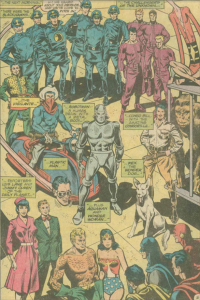 Legion of Doom: Commander Blanx and the White Martians

This is a slight jump to conclusions on our behalf, they are never referred to as the White Martians in the book, but they are Martians and white and we know from further DC Lore that’s what they are called.

That said, the villains were a solid start. The scale of the story was trimmed back so it made sense to have a more personal threat. In this case, Martians from J’onzz’ homeworld who not only want him dead, but have no problem creating a bit of panic and hysteria along the way.

Like the League’s original origins this one is also told via flashback sequence. Instead of being a cause for celebration though, it is Green Arrow confronting members of the League with the knowledge that their official origins doesn’t line-up with real world events.

Unlike the previous origin and their first mission, this story has a much smaller scope as it has a central focus on the Martian Manhunter. Not only is he the narrator of the story, but he is the pivotal figure for all plot threads presented here. It means that for the most part the story doesn’t jump around much in the first act and a half and the final like half of the 3rd act, which is great.

On the downside, the League’s reason for coming together isn’t nearly as compelling. They aren’t pulled together by a common cause or because they answered the call to action. They just happen to get randomly assigned to the same team. Which was also insanely lopsided. Like one team is Superman, Wonder Woman, The Flash and Batman, the other has Plastic Man and a bunch of pilots?

Speaking of the teams, at one point Batman and Robin decide that they work best on their own and decide to pursue the investigation on their own. The next time we see them they are with a group and nothing is ever said of it again.

We didn’t find this origin nearly as compelling as the original. Though on paper, it seems to make more sense with a streamline focus and a more personal threat, but sometimes it’s better to go big. That said, it was fun to see a ton of heroes in action. And the White Martians do become a staple of many Justice League origins going forward. So historical!