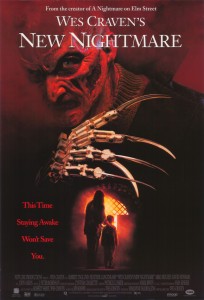 Despite New Line Cinema’s insistence that the Nightmare on Elm Street series was permanently laid to rest (did they remember the holy water?) after the release of the abysmal Freddy’s Dead, it would find new life three years later with 1994’s Wes Craven’s New Nightmare. Realizing how badly they dropped the ball the last time out, New Line begged Wes Craven to return to the series he created and wisely gave him carte blanche to run wild with the story. The result is a thoughtful take on the Freddy Krueger phenomenon that remains the most unique entry in the series.

The film follows Heather Langenkamp (the actress who portrayed Nancy Thompson in the original A Nightmare on Elm Street), playing “herself.” Heather lives a quiet life with her husband Chase, who is a Hollywood special effects technician, and their young son Dylan. Although 10 years have passed since the release of A Nightmare on Elm Street, the film (and its demonic villain, Freddy Krueger) still haunts Heather – at times, quite literally. 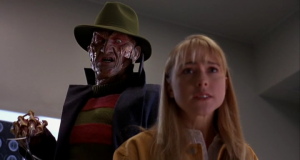 After having a violent nightmare about Freddy’s disembodied bladed glove attacking her family, Heather calls Chase, who is out of town working, and asks him to return home as quickly as possible. On his way back to his family, Chase falls asleep at the wheel and is attacked by Freddy, causing the vehicle to veer off the road and violently crash, killing him instantly. While Chase’s death is ruled an accident by police, Heather can’t shake the feeling that her on-screen nemesis is a very real malevolent force who is after her and her family.

New Nightmare has a lot of fun analyzing the phenomenon of Freddy Krueger’s popularity as seen through the eyes of fictionalized versions of the actors who worked on the early Nightmare films. Wes Craven, Robert Englund, John Saxon, and even New Line Cinema president Robert Shaye all appear as “themselves,” divulging to Heather how being involved in such an influential series has affected their lives. While some of these moments don’t work (it’s hard not to laugh when a character excitedly proclaims that Wes Craven is having nightmares again), they generally do a good job of metatextually examining the nature of cinematic storytelling. 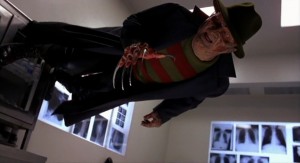 The film is peppered with a few effectively brutal death sequences as Freddy, who is revealed to be a nameless, ancient evil that is merely content with assuming the visage of Freddy Krueger, stalks those close to Heather. These sequences don’t necessarily detract from the film’s overall quality, but they do feel like they’re from an entirely separate movie at times. Freddy receives a rather significant redesign to make him bulkier and more menacing in keeping with the film’s more realistic tone, and while the redesigned Freddy looks appropriately intimidating, the character feels a little bland when not acting like a demented court jester.

New Nightmare has a clever premise and was ahead of its time in 1994, but it sadly has not aged very gracefully over the years. It’s great fun when it fully commits to its self-examining nature (the scene in which Heather appears with Robert Englund as Freddy Krueger on a talk show is undeniably great), but it often feels at odds with itself when trying to also be a full-fledged entry in the series.  Wes Craven himself would revisit the idea of a self-aware horror film more successfully with 1996’s Scream, but he deserves a lot of credit for getting the idea off the ground within an established series withNew Nightmare.

Rating: 5 (out of 7) – It might not be the imaginative game-changer it was in 1994, but New Nightmare still has plenty to offer as a self-examination of an influential horror series.