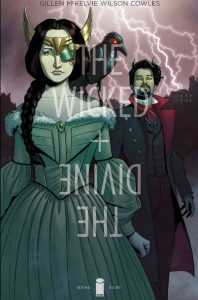 In this month’s issue of The Wicked  + the Divine, writer Kieron Gillen and guest artist Stephanie Hans take a break from the ongoing saga of the death of Ananke and Persephone’s descent to the dark side to spin a yarn of love, death, and the Pantheon, circa 1831. Some of the names are familiar, like Lucifer, Morrigan, and Woden, but the human identities of the Pantheon are very different and are some of the greatest creative talents in English literature. They include Mary Shelley (Woden), Percy Bysshe Shelley (Morrigan), Lord Byron (Lucifer), John Keats (Hades), and the sadly forgotten Claire Clairmont (Inanna), who was Mary Shelley’s stepsister and Lord Byron’s lover. (Unfortunately, William Blake is dead at the time of the story.) The story is set at a beautiful Lake Geneva house where supposedly Mary Shelley came up with the idea for Frankenstein.

In this comic, Gillen and Hans connect the fleeting revolutionary imagination of the Romantics to the short lifespans of the gods of WicDiv. (They become gods and then die after two years.) It also doesn’t hurt that the Romantic poets didn’t live for very long with Keats dying at 25, Percy Shelley at 29, and Lord Byron dying at the relatively advanced age of 36. WicDiv #1831 shows the transition from the Romantic to Gothic movements in English literature in a very sexy, beautiful way as Lucifer and Morrigan try to bring back their old buddy Hades from the dead, but instead awake a creature. (Not a monster even though resurrected Hades is basically Frankenstein’s Monster.)

Gothic fiction is based in fear whereas Romantic fiction is based in hope, and you can see the hope drain out of Morrigan’s body as Hades attacks him in a sequence that shows Hans can do grotesque as well as gorgeous. Like his namesake in Paradise Lost, Lucifer tried to defy the natural order and bring his friend back from the grave as well as live for more than two years. Of course, his actions have a cost, and he fails miserably. In a similar way, Inanna gets her divine powers by draining the life force from Woden’s unborn babies and thinks because of her lesser status she can escape. (I didn’t know who Claire Clairmont was until I read this comic.) But death comes for her too because it is inevitable, which is really the overarching theme of WicDiv. (E.g. “It’s never going to be okay.”)

And Woden (unlike her chauvinist counterpart in the main WicDiv series) is really savvy about this thanks to her interest in horror stories instead of romances, like the rest of the Pantheon members. Gillen encapsulates this in one sharp line of dialogue, “We are dead and make nothing but death…But nothing will outlive us.” As humans, we have a limited time on Earth, but we can make the most of it through creating something, like a story, song, or maybe even a piece of criticism. Mary Shelley is dust and bones, but she gave us the modern horror genre and the Frankenstein myth, which artists (including Gillen and Hans in this comic) have been riffing off, retelling, and remaking for the past two centuries to varying degrees of success. 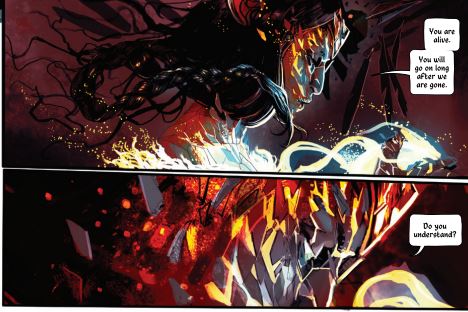 Stephanie Hans depicts this act of creation in a scene that follows the death of Morrigan as Woden willingly lets the resurrected Hades take her form and life force in a cascade of red and gold. Hans zooms closer and closer to Woden as she selflessly gives her life to this creature, who outlasts this Pantheon just like most people are more familiar with Frankenstein than, say, Childe Harold’s Pilgrimage. Even though Woden seems cynical compared to the fiery idealistic, hedonistic, and definitely hubristic Lucifer and Morrigan, she is the one who leaves the world with a living legacy. 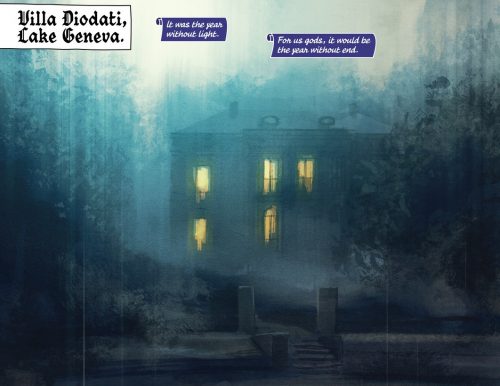 WicDiv #1831 is sexy, fatalistic, beautiful, and a tiny bit monstrous all thanks to the artwork of Stephanie Hans, who in a single almost Impressionist image transports us to the Romantic period. As Byron said in “The Destruction of Sennacherib”, the Lake Geneva house”gleams purple and gold”, and Hans make it seem like a house oozing with life and creativity. But this life is replaced with death thanks to super-Gothic entrance of Woden and Morrigan, who bring shadows and dark crows to the party.  They spin stories and have a glorious party, but the evening ends in most of their demises. Beauty and shadow are an ever present part of Hans’ art in the comic and bring the theme of creativity and death to the forefront.

WicDiv #1831 is pulsating with big ideas about death, creativity, gender roles, and the horror genre and sticks its landing thanks to the precise and poetic writing of Kieron Gillen and the big emotional art of Stephanie Hans, who can go from depicting a glorious soiree or lake in glittering watercolors to showing a woman straightforwardly talking about miscarriages done in an etching style.

If you wanna feel sad about death and art and steampunk Mary Shelley, check out this comic.