Dark Horse is set to release the second issue of the Son of Dathomir limited series this week, featuring the recently-less-insane-and-spider-leggy fan favorite, Darth Maul. We pick back up with a wounded Maul scrambling to gain some insight and  time to regain his army’s composure in their fight against the Sith. At the same time the Sith are maneuvering to anticipate their opponent’s moves and strike subtly. It’s a pretty interesting read, overall, but let’s take a closer look at why.

To begin, the art is something exceptional. Keep in mind I say this, despite maintaining that it’s not my preferred style. To begin, the pencils and inks blend together very well. Most of the reason I say that is because it’s difficult to distinguish what additional work the inks have done on top of the pencils because the line work is, as a whole, quite busy. There are a huge amount of details and shading involved, but in the form of careful cross-hatch and constant additional strokes that don’t have to be there. 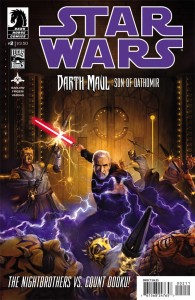 In a method that’s basically the opposite of minimalist (another of my less than favorite styles,) even distance doesn’t deter the artists from adding these consistent, detailed works. While some methods resort to long distance shots reducing characters’ faces to pink blobs, this artistic choice continues to pay attention to the details of things like mustache hairs and the particular directions the characters are looking toward. This style of super detailing, again, isn’t my favorite style, but it’s hard to not appreciate it. The issue focuses a lot on large battles, and in taking an artistic approach that celebrates small differences, this makes having to consistently draw distinct and separate characters (such as masses of uniquely decorated Mandalorian armor or Zabrak body and face tattoos) is something worth taking note of.

The colors are also something I wanted to specifically take a moment to discuss. The spaces where inks and pencils didn’t leave a lot of direction in terms of structure are not common, but those areas which offered the colorist some discretion were wonderfully done. Most notable among these examples are the vasts of space that serve as backdrops to the ship fights. There are huge amounts of intricate colors and gradients depicting stars and planets that add up to a gorgeous setting. Even some of the monitors have very detailed displays lit up showing data listed in the control rooms. This is definitely something I’d consider above and beyond what would have sufficed to simply make the comic feel like a cohesive effort.

The story, on the other hand, I’ve formed less concrete opinions of. I always tend to think that stories that involve conflict between “evil” groups are awfully difficult to write, and I think this isn’t an exception. This comic focuses on the conflict between the Nightsister society and the Sith. Neither of these factions are known for their straightforward tactics, and this comic exemplifies that well. Mother Talzin and the forces behind her, including Maul and his army, make careful moves to evade and play on the desires of the Sith… at the exact same time the Sith are doing their own version of this dance.

This issue ends with a battle’s seemingly significant victory for one of the two sides, but who is to say that the issue doesn’t conclude exactly as the “losing” side intended? This is the difficult part of deciding if the issue was outstanding or awful, from a story perspective. Potentially brilliantly, we are given only as much information as the lieutenants of each side receive. What does Darth Sidious really have planned? What about Mother Talzin? The potential moves and counter moves when writing about such devious groups are nearly endless. This particular week, we see a lot of action but since we are given only cursory glances at the true motives of each side, it’s very difficult to say who is actually winning.

Now, this could be wonderful thing or a terrible thing. If each side is defined as a cunning master of deception, and the follow up to this issue is an underwhelming and flat “battle of wits,” it could end up a very poor arc. However, if there are twists and turns still being set up, and the fact that we, as an audience, can be played is a powerful tool. Offering limited information to the lieutenants of the warring sides and having them be the audience’s primary method of gathering information sets up a great potential for outstanding writing.

Unfortunately, we really won’t see which way it goes until we get the next few issues, so I’m having some trouble concretely defining this issue as one written well or not. I will definitely say the art is outstanding, and the writing has set up endless paths at its disposal… but only time will tell if that potential is realized or not. If you’ve already picked up the first issue, I definitely recommend picking this up, as I tend to think of myself as a closet optimist. However, if you’re behind and haven’t started the limited yet, hold off for now. The possibility for trite and shallow resolution is as real as any other outcome. In that case, I’d suggest waiting to see some reviews once the limited has completed.