Spelunky has already seen an XBLA release last year. Now it is also available on PS3 and the Playstation Vita. I have taken a look at how the Vita version has turned out. 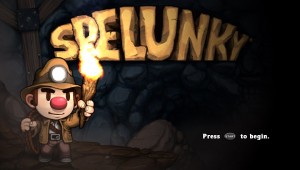 If you payed attention to my game of the year list of 2012,Â you will have noticed that there were a lot of Rogue-like games on there. However, Spelunky was nowhere to be found. It isn’t because of the lack of quality, it just got edged out by other titles. The PlayStation Vita version of Spelunky features the same great content from the Xbox Live Arcade edition. It still is this very cute looking platforming game, with it’s hellish difficulty and of course permadeath. You try to jump and fight your way through the levels to reach you goal of a big treasure at the end of it all. Getting there though takes a lot of work. You will have to make good use of the tight controls to maneuver your way through the levels, dodging 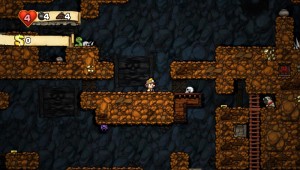 all kinds of traps and monsters. You really want to be careful because otherwise you will quickly lose the little health you have and it’s all over. it’s a trade off though between being careful and going for the gold, because with that you might be able to buy yourself some nice equipment at a shop with might help you out in your quest.

In addition to the single player content, which sees you trying to safely navigate various caves and make a ton of money along the way, the game also features multiplayer. In deathmatch mode, you can play against other players or bots in small, but still very deadly levels. The action is fun and frantic and it’s not rare that a match might actually end in a couple of seconds. It is a nice distraction when you had a couple of bad runs in your main adventure and can also be a fun party game because of the chaos. Sadly there still is no online option so local multiplayer is all you will get. 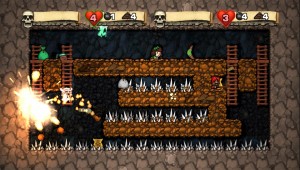 On the Vita, local multiplayer has one big advantage over all the other versions of the game since it supports 4-players co-op. This inclusion actually makes the multiplayer slightly more difficult. Getting all four adventurers through these dungeons while having to stay on the same screen can be a herculean task. With the Vita version this is no longer the case because everyone gets their own screen which makes the game as easy or difficult (depends on how you feel about that) as the solo adventure. This is an amazing addition and does not just work with multiple Vitas, no you can also link up your Vita to a PS3 and have the separate screen experience.

On top of that you also get all the DLC that was released for the XBLA version of the game. That means you get 8 new adventures, who are just skins but still nice to have, and you get more deathmatch levels. It also doesn’t matter if you buy the game on your Vita or the PS3, you always get both versions for the price of one. The only thing that was sadly not added is the the daily challenge mode that can be found in the Steam version, but it’s not that big of a deal.

Score 6 (out of 7): So will Spelunky make my game of the year list this year? It’s too early to tell, but what I can tell you is that the added multiplayer options for this title elevates it to another level and actually makes the Vita version the one to get. Especially since it is such a short burst title (sometimes a run in adventure mode can be over within a minute) it lends itself fantastically to the portable format.