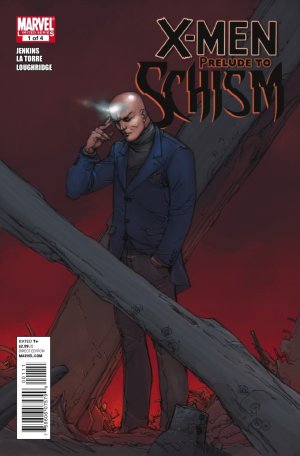 Chuck is back, again

X-Men Prelude to Schism #1 explores the past of Scott Summers, and his relationship with Professor Xavier, as well as hinting at a huge threat that the mutants on Utopia will have to face — or flee from.

I don’t think I’ve ever read a comic by Paul Jenkins before, but I was pleasantly surprised with his work on this issue. The issue is mainly about Scott and Charles’ relationship, and thanks to a good understanding of it on Jenkins’ part, it’s a pretty captivating read with some real emotion.

The art is likewise pretty decent, but nothing too special. It’s a bit inconsistent though, as some panels have a fair amount of detail while others don’t, especially close ups. The art could use some polish, but overall it’s serviceable. The colours are pretty dark and murky throughout the issue, but since the plot deals with some heavy stuff, it fits pretty well.

Ah, the plot. I’ll go right out and say it: not a whole lot happens in this issue. It basically just goes through Scott Summers history with the X-Men, and doesn’t actually build up to the upcoming Schism X-Men event a whole lot. Now, when it does actually relate to the event, it kind of frustrates me, because it basically says “oh no danger’s coming, what are we going to do?” and is really just a big tease to make you interested. Anyway, back to what actually happens. What we do get in this issue isn’t bad, but it’s ground we’ve tread on many times before, so set your expectations accordingly.

Bottom Line: Go for it if you’re an X-Man fan, just don’t get your hopes up too high.

New Reader Accessibility Rating: 3 This issue mainly just re-caps past events, although if you don’t already know of these events you might be a bit lost. If you know the general X-Men history, like the Dark Phoenix Saga and that kind of stuff, you should be fine. Otherwise, you’ll probably be a bit confused.