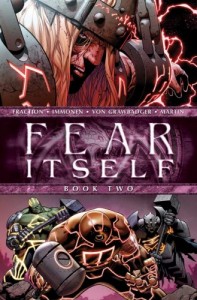 Marvel Solicit: The Mighty Thor–imprisoned by his own father! As Odin and the Asgardians leave the Earth to fend for itself against the God of Fear, the Avengers and the world’s remaining heroes battle the unstoppable tide of terror! And then– the Serpent’s Hammers fall! Who are the Worthy? Who shall rise up and join the Serpent as living avatars of his evil? And how can the Avengers respond…to fear itself?

Some questions are answered, but just as many more questions are asked. In issue 2 of Fear Itself, we find out who some of The Worthy are. That sadly means that this issue is mostly set-up, but that doesn’t mean it’s not good.

Fear Itself #2 opens with the Asgardians returning to Asgard, or, at last, the space where Asgard is going to be. This is a great opening to the book and perhaps even its strongest scene. As someone who didn’t know much about Thor prior to working at Marvel, Fraction has so far done a good job with the Asgardian scenes in Fear Itself. He really understands the voice of each of the main Asgardian characters. The squabble between Odin and Thor continues, as Thor thinks its wrong for the Asgardians to leave Earth, as this is the time when Earth needs the Asgardians the most. It’s well known comic book history that Thor has long been a protector of Earth, while Odin hasn’t always looked on the planet as fondly as his son. Fraction brings these view points into Fear Itself, for old and new readers to enjoy. I also think Thor being off planet is going to cause huge problems for the heroes, as he is one of their heavy hitters, and it looks like they’re going to need their heavy hitters for Fear Itself. 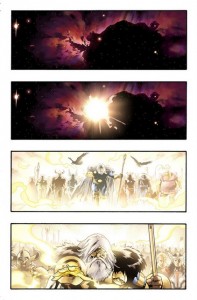 A good portion of the issue is then spent introducing us to The Worthy. Sadly, thanks to the Merry Marvel Marching Marketing Committee, we’ve known who some of The Worthy are for a while. It’s even on the cover, but that doesn’t bother me as much. The cover should give an indication of what’s in the issue, which it does. I guess it’s a perfect of example of the journey being better than the end result. We know The Hulk is going to become one of The Worthy before we even open the issue, but it’s still fun to see him become one of The Worthy, largely because Stuart Immoen, and the rest of the art team, does a great Hulk. The Hulk is also, so far, the only hero (or good guy, if you will) who we know becomes one of The Worthy. This could make him the most interesting one to keep an eye on.

A problem I had with the issue is actually the last page. In the same way the opening of Fear Itself 1 zoomed into Manhattan, this page zooms out. The final panel of Earth does raise some interesting questions, that’s not the thing that bothered. It’s the speech balloons that bothered me. It’s a mix of news broadcasters (I’m guessing) and in there is also Steve Rogers. On my first read of the page, I missed the Steve Rogers word balloons. I get that the creators were trying to create this sense of chaos on the page, but Steve’s speech should have been made clearer. In a way, it spoiled the end of the issue for me.

Recommendation: Try it out.

New Reader Accessibility Rating: 3. As this is the issue were most of The Worthy are revealed, its still pretty early days, story-wise, for Fear Itself. I think issue 3 will be the issue were things really pick up.