Review Shooter: Superman vs The Elite

There is a thin line between hero and villain. Motivations from either side of the isle can be fairly similar, but it is how you go about achieving said goals that truly defines your role. Superman vs The Elite works so well because it looks to address the issue head on with the Man of Steel. For a man with near limitless powers, shouldn’t he be doing more to right the wrongs in the world? 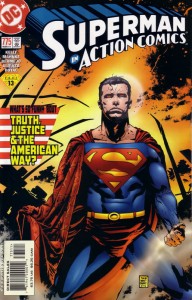 Superman vs The Elite is an adaption of a single issue story written by Joe Kelly, titled “What’s So Funny About Truth, Justice and the American Way?” (Action Comics 775), and is the shortest source material adapted to date. However this allowed Joe Kelly a chance to expand on his original idea and play around with some of the concepts. I won’t really go into details as to if it improves the original comic or not, but it is a strong adaption that really does add a lot of meat to the core idea.

And for those who are unfamiliar with the comic, the core idea is that Superman’s means of “justice” are antiquated and no longer needed in this world. What’s the point of putting away a super-villain for the 100th time, if they will simply break out of prison and do it all over again. Enter The Elite, a new age group of superheroes led by Manchester Black, they play a little rougher than Superman. Of course The Elite soon go too far, and it turns into an all-out brawl (it is a comic book movie!)

While the conflict of ideals between Superman and The Elite drive the main narrative of the story, the other interesting sub-plot is the world turning against Superman’s ways. News reporters, people on the street and even The Elite question Superman’s methods. And this in turn forces Superman to take a long, hard look at himself. Is his belief in Truth, Justice and The American Way overrated?

The film doesn’t just relay this message to you verbally, but also with some amazing visual nods to Superman’s history. The opening credits is a faux look at Superman’s history in animation including footage from the Fleischer animated shorts and his stint as a Superfriend. And then the film starts off proper with a cheesy Superman short being watched by Lois. Superman comes off as this hokey, corn-ball hero from another era. And Lois even calls him on this, asking if he knows what type of image he is projecting to the world. There’s also two callbacks to Superman’s image at key moments in the film which were nice touches that I won’t ruin. 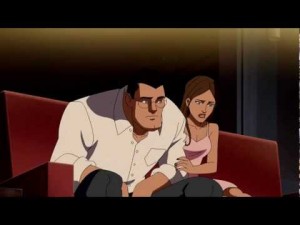 The most interesting thing about this premise is that its just as relevant today as it was 11 years ago when the story was originally written. First on the front that our heroes need to be violent, on the verge of psychopathic at times, to be compelling. While this isn’t true of all heroes, there does seem to be an underlying theme in comics that dark and gritty sell so we see more of that than Superman’s ideals. Then there is the criticism often slung at the Man of Steel, “He’s boring”, “He’s too powerful”, “he’s unrelateable” and knowingly or unknowingly the movie addresses those concerns. Both with his dealings with the press and his own self-awareness of his role in the world.

Will this movie change people’s mind? Will it make us yearn for more innocent and pure superheroes? Probably not, but it will give as an amazing look at one.

Aside from the premise/plot of the movie, we have some truly interesting characters. The focus of the film is of course on Superman, who seems to be a combination of various ones that have come before. He is voiced by George Newbern, the voice actor from Justice League/Unlimited. As Clark Kent, he wears his reporter’s hat, which is an old trademark. While I’m not the biggest fan of the actual Superman model (Actually, most of them in these DTVs have been iffy), I do think it fits the movie.

Then there is The Elite led by Manchester Black, who is as British as they come. He seems to drop the word “wanker” in every scene. He is the main rep of The Elite, and quite the talker. This makes for an interesting time because he is charismatic and likable, its really hard to dislike him. And that is his role in the movie, unlike the other Elites, he doesn’t come off as evil or sinister or swarmy. It also explains why he is their mouthpiece. 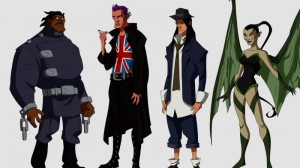 The rest of the Elite could go either way. Hat is the team’s drunk/magician. He spends half the movie getting wasted or being wasted. There’s even a scene with him throwing up after a victory. Menagerie, who is the most villainous looking member of the team, I think mostly due to the fact she has snakes coming out of everything. and finally Coldcast, who is the powerhouse of the team.

It is a really remarkable cast of the “Cool” kids. They are even designed, at least Manchester and Hat, to appear cooler than Big Blue, and it works. I mean if push comes to shove would you rather dress up as Manchester Black or someone wearing your underwear on the outside?

The animation in this film is top-notch, and there are several fantastic set-pieces, which I won’t deconstruct because I really do think its something you need to see to love.