The widely popular Darth Maul is coming back today in a new multi-part (no pun intended) series from Dark Horse. For those that don’t keep up with Clone Wars, it turns out our angry Mr. Maul survived being cut in half and proceeded to go old-cat-lady-insane down in some dingy hole in the ground. His brother, Savage Opress found him and took him home, where he was healed and given some pretty kick-ass robot legs… JP would definitely be jealous. The issue is scripted by Tom Taylor with art by Bruno Redondo and colors by Michael Atiyeh. 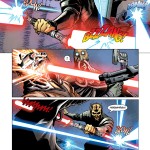 The art is pretty standard stuff, nothing standing out as exceptional, but nothing really bad about it either. The style make use of some heavy inks and very line-based shadowing for texture. It’s not the cleanestÂ I’veÂ ever seen, but it’s definitely also not the busiest. Atiyeh does the colors well to compliment, helping to give a little more depth to what could have come out a busy mess with all the line-shading. There are still a few pages that border on eye-straining due to all the detail and shadows, but it’s pretty rare and really my only complaint.

The story has a decent enough start, which is really all you can ask from a series that is on issue 1. While we haven’t seen Maul since his brother discovered him in the animated series, this iteration of him is handled in a much more mature manner. A good example is the fact that we literally don’t get past page 3 before Maul has Force-twisted-some-poor-bastard’s-head-backwards, not to mention later smashing wookie heads through walls with his robot legs. If you are still curious as to Maul’s mood these days, just reread the last part of the previous sentence. I have to admit I’m pretty happy I had an occasion to write that. 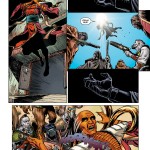 Nothing really stands out in the story as bad, things flow well, characters begin developing in believable ways, and I enjoyed the read. That’s a pretty big compliment, seeing as how taking on the first real story about Maul since he was brought back (not counting his little fight with Vader) is bound to be a very delicate task. Handling such popular characters always is, especially as they are reintroduced into continuity. Darth Maul is vicious and unrelenting and I definitely look forward to where he goes from here. While this issue doesn’t really pack a wow-factor that makes me rave about how amazing it is, it’s a solid issue and a great start. If you’re a fan of Darth Maul, I’d suggest getting in on the ground floor with this new series, it has a promising run ahead of it.