Â Dark Horse is releasing a Mass Effect four issue limited series called Homeworlds. Each issue is an one-shot dedicated to a single character in the ME universe for a quick, character-specific story. Issue one focuses on James Vega and boasts a creative team of Mac Walters (lead writer for ME2 and 3) on the script and Eduardo Fransisco on art. As a huge fan of Mass Effect, I am definitely excited for the series, so let’s take a look through the first issue. 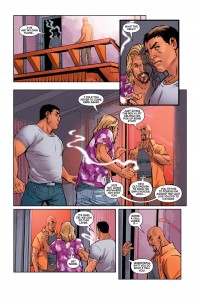 I suppose the simplest way to ease into what may be a rather difficult journey may be to start with the art. Have you ever read a comic that was about characters from a different medium, such as from movies or games? If you’ve read any decent amount of these types of comics, you know that you will occasionally see the characters change mediums and look significantly different. This story includes a long flashback into James’ past, before he was a soldier, before he had tattoos, etc. Looking at the character in the flashback, if I wasn’t explicitly told that it was James, I would probably not have guessed it, unfortunately.

The art is rough and scratchy, which I’m not much a fan of. Dark Horse’s frequent colorist of choice, Michael Atiyeh, does an outstanding job on the colors, however which makes it much more dynamic than it could have been. Other than the scratchiness of the art, I seem to get disoriented by the images as well. Things can seem spatially skewed, there are jumps in the story that I don’t understand, and missing details as well. Perhaps an example will help explain what I mean. In one panel, James is wearing a leather jacket and hanging from a ledge while an explosion occurs under him. In the next panel, he’s on the ground, inexplicably, and his jacket is gone. How did he get down and where did his jacket go? I mean, there was an explosion, he must have been high enough to be safe from it, which likely means he didn’t just drop the distance, so how does he just appear on the ground, now jacketless? 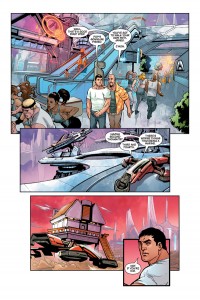 Moving on to the story, assessment here is a bit more complicated. Starting with the bad, I think the execution is pretty poor. The story is mostly a flashback, but it doesn’t warn you when it happens. Mid-page you go from James on the Citadel after the Reaper invasion started to James in the past somewhere else. There’s no explanation, you’re just supposed to pick up on it, although it may take a frame or two to understand. Past that, almost half the comic is a chase scene. I suppose that’s not a clear detriment on the surface, until you realize this is a story about a troubled teen in an abusive home situation and you only have 24 total pages to get the story told. When you add in 2 pages for cover and credits, plus 9 for the extensive chase scene page, there are only 13 left to tell the emotional history of James Vega. He suffers abuse at the hands of his father, a man with a drug habit, which is a pretty significant thing (and his father has a different name than Vega, for some reason, which took me a good minute to understand). However, that doesn’t stop the comic from having a full half-page image during the chase scene dedicated to 2 cooks discussing how they are using tube-grown meat in their food. What importance could that possibly hold in this story of a character’s previous trials and formative history? Why is this in here?

The bad aside, the idea of the story is good. The overall impact you recieve from understanding James’ past a little better helps humanize him and make him a more relatable character in the Mass Effect universe as a whole. I, personally, really didn’t like James Vega in the third game. Not only was he voiced by someone I consider to be a poor actor (and hate to admit was produced from my home town), but he also frequently used god-awful Spanish slang. Contary to what some may think, the Spanish language includes many more words past “loco,” “pendejo,” and “cojones.” However, the history you learn about him in this issue makes me like him a little more than I did before, so that’s a step forward, at least.

Recommendation: Borrow Overall, if you’re not a huge Mass Effect fan, this comic is likely not worth the time or money, I hate to say. If you devour everything from the ME universe that you can get your hands on, the comic does have some good points, just don’t expect them to be in either art or story execution.