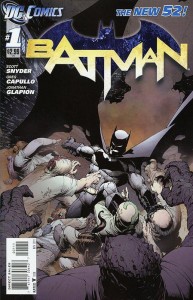 Â Â  Batman #1 follows Batman as he investigates a murder, and as he announces his plans for Gotham (as Bruce Wayne, that is).

This was the title I was most looking forward to out of all 52 of DC’s relaunch books, and I was not let down at all. The thing that I was curious about the most was how Scott Snyder, who showed us he writes a fantastic Dick as Batman, would tackle writing Bruce. Of course, this being only one issue and all, we don’t get into everything, but he did what he needed to do in a first issue: get us interested enough in his take to come back. On top of getting us interested, he also did a great job of setting up the universe of Batman as whole, with most of the villains and auxiliary characters being (re)introduced to us, and doing it in such a way that shouldn’t confuse any new readers. As for the actual plot, he sets up a gritty, gothic narrative for Batman that definitely looks like it’s going to test him not just as Batman, but as Bruce as well, and although we don’t see a whole lot of development, the cliffhanger will definitely make you want to come back next month, and probably the following months.

Now, I’ll be honest here and say that I’ve never read something that had this art team on it before, so I went in not knowing what to expect, unlike the writing, and was very pleasantly surprised. I feel like I’ve said this a lot about Batman books recently, but this does really have a gritty, realistic and dirty feel like say, The Dark Knight Returns for example. The opening action sequence is just plain awesome, with Batman taking on a good chunk of his rogues gallery, and it lets you know that this book will be a page turner for sure. One thing I do want to make note of, is that the designs for the villains here are really interesting and make a hell of a lot of sense given the context. There’s also a nice cameo in there for fans of Snyder’s Detective Comics.

Survival Rating: LIVE! It was probably the biggest selling Batman book before the relaunch, and with this quality, I see no reason for that to change.

Recommendation: BUY IT! You should know by now that a book written by Scott Snyder = an awesome book, and if you don’t NOW is the time to jump on.