Scourge Outbreak is a game with an muddy history. Originally released as “The Scourge Project”, in two episodes and now an one updated package, Scourge Outbreak aims to deliver an experience akin to blockbusters such as Gears of War in a more digestible form. 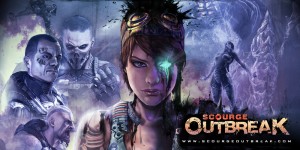 Scourge Outbreak puts you in the shoes of one of four members of Echo Squad, a group of mercs sent to investigate the facility of a corporation named Nagari, which has been generating a new energy substance named Ambrosia. Right off the bat impressions are given that the story has little in the way of originality, and sadly, it continues that way right up to the end. There are short story flashbacks that are unique to each character, but sadly these arent worth replaying the 5 hour story an extra 3 times. The lack of interesting or novel plot is only emphasised by generic character interactions and sub-par voice acting. And sadly this is indicative of Scourge Outbreak is a whole.

The visuals, while not offensively bad or low resolution, also aren’t very inspired. You will move from level to level barely noticing much difference from each area as most are set in brown-grey metallic facilities. One area, which was snowy and inside of a rocky chasm was a breath of fresh air to experience, only to be replaced with more metallic hallways not half an hour later. The character designs and weapons also exhibit all the sci-fi tropes under the sun, with Gears-esque beefy men wearing brown-grey Crysis nanosuits. 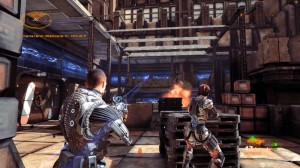 But what does that matter if the gameplay is good, right? Sadly, mediocrity continues, with a slightly buggy third person, cover focused shooter approach. The weapons, for the most part aren’t terribly satisfying to shoot, which is caused by a combination of the weak sound effects used and the low amounts of damage dealt for the most part and this is pretty much all there is. Each level seems to blur together into one as you take cover, and shoot the same few enemy types again, and again. There may be times where you need someone’s DNA to open a door, and it turns out all you have to do to get said DNA, is kill a specific enemy. These doors are encountered many times, and this idea never gets any less repetitive. Occasionally, you will also encounter Boss fights, that sadly always develop into a war of attrition as you go through the motions of killing numerous amounts of minions, getting a few hits on them, and then working your way through more minions over and over again.

The game also boasts numerous multiplayer features including 4 person online co-op in the campaign which seems to work as you expect, but has no interesting team interplay and 4v4 competitive multiplayer in the 3 usual modes, Deathmatch, Team Deathmatch, and Capture the Flag. These modes also work as expected, but are unremarkable.

Verdict 2 (out of 7): In the end, Scourge Outbreak is a very dull game. It seems to lift ideas left, right and centre from much bigger, much more developed, much better games, and doesn’t execute on any of these ideas particularly well, and this permeates every aspect, from gameplay, to visuals, to plot, to characters. There is simply nothing interesting of note to be experienced simply because of how inoffensive and mediocre it all is.