It’s WrestleMania 30 weekend, and what better way to celebrate than counting down the Top 7 Best WrestleMania video games of all-time! To be clear, this is a list of WWF/WWE games that have WrestleMania in the title. Not just WWE games and not the broad wrestling games in general.

With that said, let the countdown begin!

7. WrestleMania (NES) – As they say, you always remember your first. This is not only the first “WrestleMania” game, but it is the first WWF/WWE game (let’s just stick to WWE from now on) and while many games would improve on the formula, it was a great starting point. It has a lot of endearing qualities on its own as well including various wrestlers music being played in the background of matches as well game music. The weird 3 sided ring they created for the best angle. And a decent roster of Superstars. It may be the oldest, but still worth checking out.

6. WrestleMania: Steel Cage Challenge – It is interesting to think about how long it takes wrestling gimmick matches to be introduced into wrestling video games. The steel cage match was always a staple of the industry, but it took quite a few sequels until it was included in a console release. Hence, we get the aptly named WrestleMania: Steel Cage Challenge, which again improved on the foundation created by the original WrestleMania and introduced us to one of wrestling’s greatest gimmicks.

5. Legends of WrestleMania – We jump ahead a couple of years later, and WrestleMania has become the global phenomenon that we know and love today. It was only fitting that gaming decided to dig into the nostalgia of the event by crafting this game, which was one of the first to pit WWE wrestlers from different eras against each other. Always wanted to see Stone Cold Steve Austin vs Hulk Hogan, you can. Wanted to see if the Undertaker’s legendary WrestleMania streak could withstand the power and size of Andre The Giant, go for it! This game more than anything is included for scratching a huge nostalgic bone. 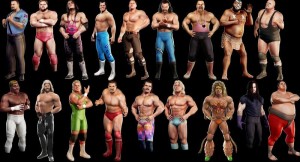 4. WrestleMania: The Arcade Game – There are people who hate this era of WWE games, and I can understand why. But WrestleMania The Arcade Game and its sequel, In Your House, have their own unique charm in the world of pro-wrestling. Being more fighting game than pro wrestling sim, it was fun to be just a little bit over the top with the license and its wonderful world of characters. 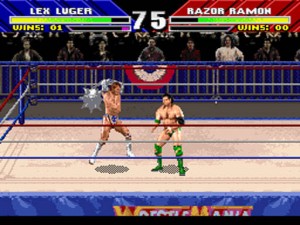 3. Super WrestleMania – The final form of the original WrestleMania style of gameplay, Super WrestleMania (as the name would imply) made the jump to 16-bit with sharper graphics, newer wrestling, more signature moves and matches (including a take on the Survivor Series) and more. It would be bested by its sequels, but was a fine step into a new era of professional wrestling. It is also notable for being one of the first wrestling games to have a split roster. With the SNES and Genesis version sharing characters like Hulk Hogan and Macho Man, but others being exclusive to one console such as the Road Warriors and Million Dollar Man.

2. WrestleMania XIX – Let’s get this out of the way, this has one of the strangest story modes in all of wrestling game-dom. This includes WCW Backstage Assault. I’m not entirely sure who conceived the idea or why, but it’s there. Luckily enough for us, and this game, the core gameplay is remarkably solid. Being a strange marriage between Yukes’ SmackDown games and AKI’s Nintendo 64 wrestling game, WrestleMania XIX would prove to be the building blocks for one of the finest wrestling game series in the past decade. A vast roster of WWE Superstars, full entrances with theme music, and one of the first inclusion of the Hell in a Cell.

1. WrestleMania 2000 – Considered one of the best wrestling games of all-time, it’s no surprise that it would top our list of WrestleMania video games. The first WWE game produced by THQ and AKI hit the ground running with the biggest roster of WWE Superstars at the time, production values up the wazoo and options upon options. But what really made the game standout at the time was its extended Road to WrestleMania mode, which saw the player fit through a year of programming to eventually headline WrestleMania 2000. It was very cool, and still one of the most unique story modes in WWE games. 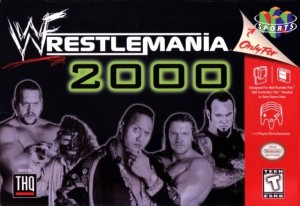 There you have it, our Top 7 WrestleMania video games of all-time. Perhaps, you can find one to play this weekend as you wait for the 30th WrestleMania event!