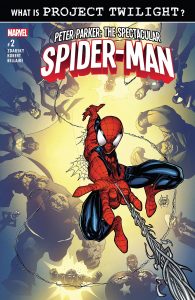 Spidey is back to his almost trademark goofiness in Peter Parker: The Spectacular Spider-Man #2, which is a comic that features a hero versus hero battle, a plot summary to a Spider-Man original graphic novel, and some stuff about the Parker family’s not-so-ordinary backstory while still remaining entertaining. Chip Zdarsky’s joke-a-minute writing style definitely helps move things along and fits with Adam Kubert’s loose, jazzier approach to art. He turns Ironheart’s armor into a deadpan reaction machine and also makes Spider-Man even wackier than usual by putting him in a blazer for a coffee date. The plot deals with yet another SHIELD conspiracy so Jordie Bellaire keeps her color palette in the shadows while keeping the red and blue on Spider-Man’s costume bright and friendly for the neighborhood.

In Spectacular Spider-Man #2, Chip Zdarsky attempts to juggle two main plots and two romantic subplots. (Spidey and the Human Torch were meant for each other; it’s obvious.) There are the hacked Stark-phones going around, and there is his long lost (Not actually.) sister Teresa Parker, who is running around with a SHIELD plan to take down all heroes and villains in her bloodstream. On paper, this seems about as appealing as the half-baked Parker family secret subplot in the Amazing Spider-Man duology. But Zdarsky and Kubert sell it with comedy like Johnny Storm’s glazed over face mid-flashback retelling or the page turn reveal of the location of the SHIELD secret that seems more like the punchline to a dirty joke. The Starkphone plot allows for Ironheart to roast Spider-Man’s immaturity and also sets up more of a conventional villain for the arc. Also, it’s extremely adorable to see Spider-Man ride on her armor piggyback style while she fields questions about him not having tech to help him fly.

On the Teresa Parker front, I have more mixed feelings especially since she is so connected to a single graphic novel. But so was Damian Wayne, and look at him co-headlining his own comic and leading the Teen Titans. The way Teresa snoops around Peter’s apartment and looks at pictures of his friends and family towards the end of the issue makes me not trust her. Or maybe she’s just wishing she had a family of her own. Zdarsky and Kubert definitely start to make an effort to fill out Teresa more as a person and less as a plot starter/soap opera device in human form. Her awkward interactions with the Human Torch are pleasant enough, and she makes a good point about him using his powers to instantly heat up pizza rolls. Iceman is always making people’s beer and soft drinks cold so why can’t Johnny play the fire to his ice? 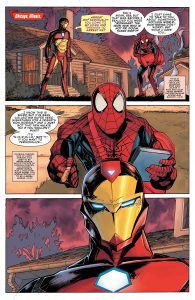 The most anticipated part of Peter Parker Spectacular Spider-Man #2 for me was Spider-Man’s date with Rebecca, a standup comic who is new to New York. As I mentioned earlier, he goes on the date in costume, and it’s completely terrible. Rebecca gets some great zingers in about the fact that Spider-Man’s mask has anime eyes and just the general awkwardness of hanging with someone who is masked the whole time. Zdarsky also puts a nice twist on the ol’ Peter Parker tries to do something with his social life and ends up being forced to be Spider-Man by having him do something social as Spider-Man instead of helping Teresa as Peter. The cartooning of Adam Kubert sells the chaotic nature of this date with Human Torch randomly showing and even “tagging in” for Spider-Man while he takes a phone call from Ironheart. Rebecca is obviously unimpressed and not a fan of Torch’s powers cancelling out the air conditioning. Spider-Man using his webs on an irate coffee snob complaining to a barista is a victory for service industry employees everywhere and is truly heroic.

Peter Parker: The Spectacular Spider-Man #2 is more spy thriller than slice of life, but Chip Zdarsky, Adam Kubert, and Jordie Bellaire keep the mood light with plenty of winking jokes about the superhero genre and Spider-Man’s life in general. He doesn’t have his life together, and the results are, well, amazing. (I wasn’t going to end the review on that obvious of a note.)

Overall: 6 (out of 7)- Even though it enters into all out espionage plot mode, Peter Parker: Spectacular Spider-Man #2 doesn’t forget the jokes and goofy sense of humor that made the first issue so great.