Review: A Nightmare on Elm Street 5: The Dream Child 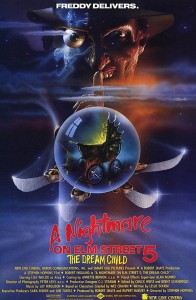 Riding high on the great commercial success of A Nightmare on Elm Street 4: The Dream Master, New Line Cinema kept the Freddy Krueger train rolling by releasing A Nightmare on Elm Street 5: The Dream Child in 1989 – just one year after its predecessor. Sadly, the lack of creativity in the naming convention used for the title and brief production period are indicative of the overall quality of the film, and The Dream Child fails to move the series forward in any meaningful way.

As a direct sequel to the fourth Nightmare film, The Dream Child once again follows protagonist Alice (the “dream master”), who, along with her boyfriend and fellow Freddy Krueger survivor Dan, is trying to forget the traumatic past and focus on graduating from high school. Just when everything seems to be going well, Alice begins having psychic visions of Freddy being gruesomely reborn. Alice’s fears of Freddy’s return are confirmed when Dan is killed in a horrific car accident after apparently falling asleep at the wheel. Adding insult to injury, Alice finds out that she is pregnant with Dan’s child just after hearing about his death. 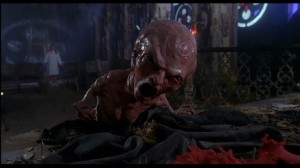 Alice tries to convince her three dopey friends (“preppy chick,” “sporty chick,” and “human version of Poochie from The Simpsons”) that Dan was murdered by Freddy Krueger, but they think she is having a nervous breakdown and ignore her warnings, going back to their vapid lives with reckless abandon. Meanwhile, Alice’s prescient dreams continue, and within them she encounters a peculiar young boy named Jacob, who turns out to be her unborn son. Alice discovers that Freddy has been using the dreams of her unborn child (fetuses dream while in the womb, apparently) to stage his return and target Alice and her friends.

After “preppy chick” mysteriously chokes to death after dozing off at a family dinner party (in the dream world, she is being force-fed her own innards by Freddy), Alice’s remaining friends finally decide to take her warnings seriously, and help her devise a plan to defeat Freddy, by… reading books with titles like “Christian Mythology.” The rest of the film is your typical race against time as Alice attempts to unlock Freddy’s family secrets in order to banish him and save her child from his corrupting influence. Yawn.

After the improbable success of parts 3 and 4, it shouldn’t be surprising that things take a bit of a nosedive with The Dream Child. The characters are unlikeable, and the pacing of the storytelling is incredibly inconsistent. The only death sequence that is satisfying in its creativity is the very first one, where Dan’s body fuses with a demonic motorcycle before slamming into a truck at full speed. Other sequences attempt to be equally extravagant set pieces, but either have too little going on (“preppy chick’s” choking scene), or are disastrously off-pitch with the tone (“human Poochie” battling Freddy as a bulked-up superhero in a comic book world). 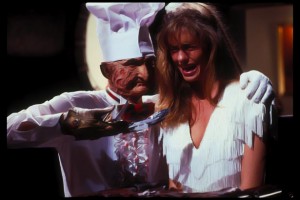 Even Freddy himself ventures into self-parody with this film, with most of his “witty” one-liners relying too heavily on tacking the word “bitch” to the end of an insult. That sort of thing was funny way back in Dream Warriors, but feels egregious and just plain lazy here. And don’t even get me started on Freddy skateboarding through the dream world, which is downright embarrassing. Director Stephen Hopkins tries to emulate Renny Harlin’s “MTV” style that worked so well in part 4, but falls flat when trying to be hip in tone. Not all is disappointing in terms of creativity, however. The set design, which lends a dilapidated, gothic feel to Freddy’s haunting grounds, is fantastically nightmarish, and feels like it might have even inspired some of the visuals in 1990’s Jacob’s Ladder and the Silent Hill video game series.

A Nightmare on Elm Street 5: The Dream Child is by no means the worst film in the series (check back next week for that one!), but for the most part it is a stale retread of the previous two entries that has surprisingly little substance – even for a “slasher” flick. Given the premise of an unborn child with psychic powers being exploited by a demonic killer, I expected much edgier material, but this is quite easily the most forgettable Nightmare in the series.

Best Kill: Dan’s “Freddybike” death sequence is elaborate and creative, and feels straight out of the Japanese punk-horror classic Tetsuo: The Iron Man, which was coincidentally released the same year as The Dream Child.

Genuine Scares: The flashback sequences involving Freddy’s mother being attacked by psychiatric patients are a little disturbing, and several of the sets are very eerie.

Rating: 3 (out of 7) –The Dream Child can be an entertaining watch under the right circumstances, but it is a poorly paced shadow of previous Freddy outings.