Visual Novels are a thing that I’m relatively new to. Outside of the antics that happen in the Ace Attorney series, I’ve only experienced the psychological pseudoscience thrills that the Zero Escape series provides, which is why I was really surprised by Hatoful Boyfriend. I had heard of this Japanese Pigeon Date-em-up before last year when the initial freeware version started to get some buzz in the west, but it wasn’t until the surprise rerelease from Devolver Digital and Mediatonic that I’d actually been interested in checking it out.

Hatoful Boyfriend is the rerelease or “HD versio 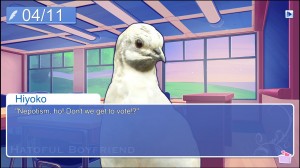 n” of a visual novel by Japanese Dōjin group Pigeonation Inc. It stars you as the main character, a girl who goes to St. PigeoNations school, a high school for birds in a world where humans are scarce and birds have a human level of intelligence. The gameplay is similar to other visual novels where the only interaction the player has is to advance the text and choose how to branch the plot at set points. The visual style is also reminiscent of other independent VNs, with little visual feedback on what is happening outside of having a static portrait of the character you’re talking to, amongst a static background illustrating where the scene takes place. This may sound a little too simple, but Hatoful Boyfriend’s strengths lie in how simple everything is.

The simplicity also shines through in its plot. There is a good cast of characters, all with their own personality, ranging from the loyal Ryouta, to the stuck up Sakuya, to the crazy San. Each 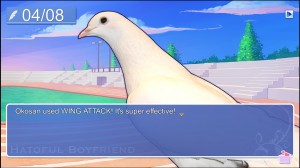 character gets just enough dialogue in the sections that aren’t part of plot branches for you to get a good idea for what they’re like to be around, but also get enough on said branches so you know meaningful things about their lives inside and outside of the school. The story has just enough humour to it to keep it from going stale, mostly through so-bad-they’re-good puns that are uttered as if they’re normal speech, though there isn’t as much humour as you’d expect considering the thematic. After playing through 6 of the 14 or so endings, I was surprised at how much diversity there is. Some endings are really sad, some are really cute, some can be ominous, and others are funny, which was unexpected given how simple the stories are.

Review 6 (Out of 7): Overall, Hatoful Boyfriend is a short-but-sweet VN for anyone who likes a little bit of simplistic whimsy. It’s a very simple game in all departments but what is there is done well, so long as you don’t take it too seriously and experience more than one of the plot branches, you’ll find yourself being sucked in.