A little more than a month out from it’s official premiere on the Disney Channel, Disney has put out the first episode of Girl Meets World on its “Watch Disney” app and website (once verified). Being a huge fan of the original Boy Meets World, I figured I would check-in with this new show to see if it offered the same heart that made the first so endearing to fans.

The story picks up many years after the conclusion of Boy Meets World with Cory and Topanga Matthews now parents of their own. First to the central character of this show, Riley, and a younger brother who isn’t actually named in the pilot. Riley is best friends with Mya, a rebellious spirit, and their relationship bares more than a striking resemblance to the own that Cory and Shawn shared in the original Boy Meets World. I’m sure it will come up in later episodes, but really surprised neither Cory nor Topanga bought up the similarities.

Especially since the thrust of the pilot is Riley “making the world her own” and one of those threads is what role does Mya spend in that world. I am of two minds with this initial plot though. I feel like it is something that would have made a bit more sense once we were familiar with the characters and this world. But at the same time, it kind of feels like a passing of the torch. Cory even says at one point that he “met his world” and now it’s time for his daughter to do the same. Playing into the title of both of the TV series. In that sense, it works tackling this issue on the premiere because Cory is going to allow her to make her own mistakes and grow much like he did during the initial series.

Cory and Riley’s story carries the crux of this premiere, which leaves a lot of the side characters with very little to do or much development. We are introduced to two other colorful characters in Riley’s class (which is being taught by her dad), Farkle who is a weird hyper-active kid. He seems to be a bit of a nerd, but also very confident in his abilities. His tendency to speak of himself in the third person should be toned down a bit though. Then there is Lucas, who will serve as the romantic interest for Riley, I guess. He isn’t really given a lot to work with in this episode other than Riley digging on him. 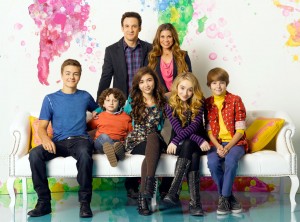 The characters who get criminally short-changed in the premiere are the rest of the family. Topanga gets only a handful of lines in the few scenes she is in. And we really don’t get to see her say or do anything of note. Then there is the little brother, who has one complete scene where he mocks his sister, but is never named. I don’t believe. Â I feel like something the show will find balance in later on. Especially being that the home and school narrative should be more tightly woven together in this series with Cory and Riley bridging both gaps.

Speaking of the original series, there is a cute little callback to the original during the premiere, and won’t ruin it by saying where it is, but it was a well-done moment.

Review 4 (out of 7): After the premiere, I think Girl Meets World has potential to live up to the original series. Now that they’ve passed the baton, the show needs to work on balance so that all characters get their moments to shine and develop.Â