You ever finish something and aren’t quite sure how you felt?

That’s my takeaway from “The FP” even days after viewing the movie for the first time, I’m not entirely sold on whether I liked it or not. What is the movie? 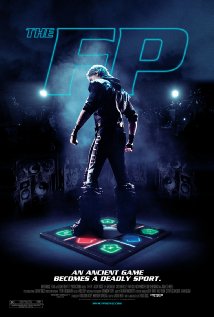 It’s a “futuristic” movie, I use that term loosely as nothing really defines it as not taking place in our time period, in which gangs settle their rivalries through a dancing video game.

And somehow, they make the dance scenes intense and intriguing and violent. During the movie’s opening sequence, one of the characters dies during one of these “Beat-offs” and I wasn’t quite sure how, but they made it dramatic and really the crux of the movie’s plot.

The movie’s plot centers on a bunch of odd characters. I wasn’t sure if this was a parody or they were meant to be caricatures of the genre. They weren’t like real people, but exaggerated forms of characters. That doesn’t make them bad characters, but really made it hard to take anything at face value in the movie.

And I think, that’s what has left me baffled at my own thoughts. By the end of the movie, I wasn’t quite sure how I was intended to process what I’ve just seen. I wasn’t sure if I was watching a clever parody or an exaggerated sign of respect to the genre. For all I know, it could have been intended as a serious piece of work.

What I will say is, I think it’s a movie worth checking out because there isn’t a proper way to talk about it without seeing it.