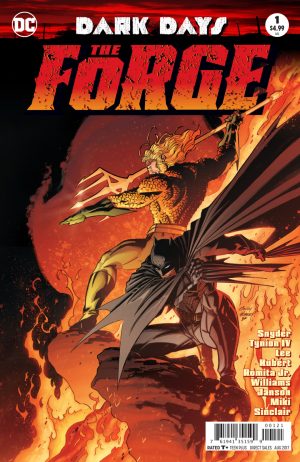 My fellow comic reading humans, this is how you kick off an event. In Dark Days: The Forge #1, writers Scott Snyder and James Tynion plot a mystery story that spans from ancient Egypt to New Genesis with stops under the sea, at the Batcave, and in the Fortress of Solitude. Jim Lee, Andy Kubert, and John Romita Jr also craft some monumental artwork even if Romita’s take on Duke Thomas make him look about 40. There is a lot to take in, and the story is deeply connected to Snyder’s Batman work along with the mythology of Hawkman and some of DC’s numerous Crises. These threads are somewhat neatly tied together by the twin motifs of magical metal and immortality. Magical metal can be found everywhere from the teeth of Court of Owls members to Aquaman’s tridents, and it seems like every DC hero worth their salt has at least one immortal supervillain. Snyder, Tynion, Lee, Kubert, Romita; the holy trinity of inkers Scott Williams, Klaus Janson, and Danny Miki, and colorists Alex Sinclair and Jeremiah Skipper exploit these underappreciated parts of DC Comics stories to craft a prologue of their own epic storyline.

It’s definitely steeped in DC lore, but at its core, Dark Days: The Forge #1 is a damn fine mystery adventure story. Think Raiders of the Lost Ark, but with T-spheres, Bat-mechas, and power rings. The framing story featuring the archaeologist Carter Hall and his studies into Nth metal and the whole Hawkman/Hawkgirl mythos that features some beautiful art that melds ancient Egypt and science fiction contributes to that old school adventure vibe. This extends to the present day story which features Batman and Hal Jordan in two separate plotlines opening or attempting to open a door that has something to do with a geological cataclysm that is affecting the entire, shall we say, multiverse. Even though heavy hitters like Mister Miracle and the Joker appear in The Forge #1, Snyder, Tynion, and company make this story only a feel like a tiny droplet of water running off a massive glacier. In scope, size, and the fact that the “Metal” storyline will be self-contained, it feels a lot like classic, earth shattering DC stories like Crisis on Infinite Earths or Kingdo Come , especially with the virtuosic quality of its art work, its semi-Biblical tone, and the variety of heroes that appear in the book. There are jokes too, though.

Most of Dark Days: The Forge, but Snyder, Tynion, and especially the artists Jim Lee, Andy Kubert, and John Romita Jr don’t abandon the humanity of the heroes that show up in the one-shot. Snyder and Tynion sometimes seem like two energetic let loose on the world’s biggest toy box, which is demonstrated in scenes of Duke Thomas and Hal Jordan bantering about the color yellow and Batman’s paranoia, or Mr. Terrific putting his 179 IQ out there and still deferring to Batman’s grand, secret scheme. Romita’s art of Batman asking Superman for help in his Fortress of Solitude has a real down to earth quality to it with the World’s Finest cracking smiles instead of glaring at each other although the future of this storyline is sure to be dire. 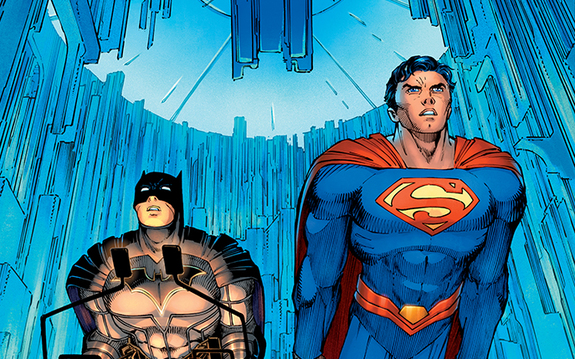 Dark Days: The Forge #1 is a little confusing, sometimes humorous, and showcase the abilities of the DC Universe to tell epic stories if the right creative team is behind the controls. It’s not the most accessible read at times, but I lived for the moments between the cryptic clues or lava flows like when Hal Jordan admires the dinosaur in the Batcave, or Mister Miracle is, well, Mister Miracle. Plus using the ever present Nth metal as a catalyst for a universe changing even and bringing unlikely disparate heroes and villains together is a clever bit of plotting from Scott Snyder and James Tynion. And Andy Kubert and Klaus Janson make the Hawkman mythos look like a spectacular science fantasy saga in the flashbacks and made me wish for a spinoff just a tiny bit.

Rating: 6 (out of 7)- Dark Days: The Forge #1 is the first chapter in a dense, mysterious, yet entertaining DC Comics summer epic. You might not get all the continuity references, but at least one moment in the story will make you smile or pump your fist.