Like peanut butter and jelly or potato chips and a sandwich, some things just go together. For me, that was Star Trek/Green Lantern. A crossover that never even entered my atmosphere until I saw issue one sitting in a comic shop, one faithful Wednesday afternoon. Here we are nearly half a year later with the penultimate issue hitting newsstand. Has the initial excitement of the crossover wore off? 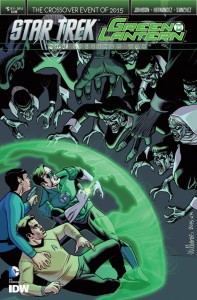 Truthfully no, somehow this crossover has only gotten bigger and more insane with each new issue. This issue starts off with the Red, Orange and Yellow Lanterns attacking the Enterprise and its crew. With Kirk and most of the crew incapacitated, it’s up to Hal and Urahara to thwart the attack and revival their friends. Real action-packed and tense way to start the issue, which really doesn’t let up in the first half. And somehow by the end, the stuff at the beginning doesn’t seem like such a big deal, but I won’t get into that.

I’m not sure why Green Lantern/Star Trek has worked so well for me, but it has. I could be wrong, but it really feels like it brings back the spirit of the height of the Geoff Johns’ run (which I know wasn’t too long ago), but just seeing all the different ring-slingers at war with each other. And it’s just the core ones, Hal, Sinestro, Larfleeze, Nekron and the sorts. We don’t have huge corps or anything which makes it more personal.

On the other side of the spectrum, while I’m not hugely into Star Trek it is fun to see the characters. Though a bit of a double-edge sword for me. While I am a fan of the newer movies, it is so distracting at times to see the characters modeled exactly out of them. Like it makes sense, but at times it pulls me out of the comics because I see Chris Pine or I see Zachary Quinto. But to counter my own point, credit to the artist for nailing their likeness so damn well.

Speaking of the art, I mean drawing Green Lantern-related stuff has to be fun. At least, always a blast for my eyes. The variety of colors. The great designs. The glowing effects. Everything always meshes so well for me. And it’s even more keen when an artist such as Angel does in without distracting from the action on the page. You can overuse colors at times, but never the case in this book. The highlight of the book is a rather simple panel, but when the Enterprise is making it’s voyage in the second half of the book. Just one panel on the top of the page which really captures the motion of it in the TV series and movies. Aces.

Review 6 (Out of 7) – Silly reason to knock a book, I know but I just can’t get over the actors’ faces in the comics. Aside from that, great read so far. I can’t wait to see how it all ends.