(Today is “Review A Bad Game Day“, an idea thought up by NintendoLegend. I’m not really sure the purpose of the day, but I enjoyed going into a game knowing to expect the worse. Below, you will find my entry for this year!”)

Sonic the Hedgehog is perhaps one of gaming’s most perplexing franchises. Built on the good-will of a generation’s worth of solid 2D platformers, Sonic has had more ups and downs in his game libraries than most rollercoasters. The mid 00s seem to have been the worst period for everyone’s big hedgehog, and ironically enough one of his lowest points came when he wasn’t even the star of the game! 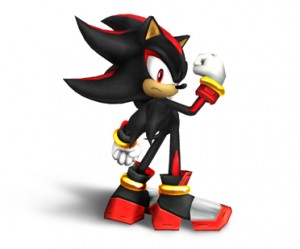 After the success of Sonic Adventures 2 (and I would imagine Sonic Adventures 2: Battle), SEGA sought to spin out the character of Shadow the Hedgehog into his own game. If Shadow was a popular enough character to warrant a spin-off, who knows, but SEGA went ahead anyhow. Traditionally the Sonic franchise has always been a more family-friendly affair, but with Shadow the Hedgehog, SEGA wanted to go a bit more “mature.” And in the video game world… that meant giving Shadow a gun.

Well, giving him a gun is a bit of a misnomer. You see while shooting does play a part in the game, it really isn’t a MAJOR part. Actually, aside from a few boss battles you don’t even really need to wield a weapon to finish stages. And that’s a good thing. The weapon controls in this game are terrible! I understand that the game is a platformer first and foremost, but no consideration was given to using the weapons at all. Take for instances, the rocket launcher, which is a favorite in many games. There’s no actual way to aim it. Instead, you have to keep moving Shadow back and forth in hopes that the cursor lines up with your target and if you miss the window? You just keep doing it over and over again. This got old really fast, and wasn’t fun. Unless I was forced to (a lot of boss battles for instances), I really just stuck with the homing attack which comes with it’s own set of problems. 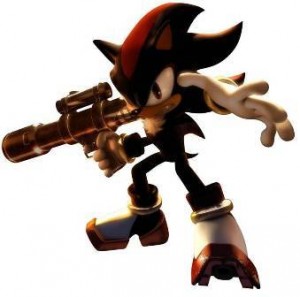 You see when the Sonic game went 3D, SEGA attempted to do some things to keep the formula intact even though it didn’t translate as well into 3D. For instance, in order to allow Sonic’s attacks to continue to build momentum, they allowed you to home in on enemies and use their placement as a sort of floating platform. It sounds great on paper, but has only really worked in a handful of Sonic games. Sadly, Shadow the Hedgehog isn’t one of the good ones. You see, when it works, it works well enough. You lock onto enemies and it kind of looks cool. When it doesn’t work, which is more often than not, your character goes flying off into a direction. Now if you are lucky, that direction has a ground in which you can land on. If you aren’t, you just sent yourself to Shadow’s funeral. And this doesn’t just happen once or twice throughout the course of the game. It happens multiple times during some levels. It isn’t fun. It doesn’t add challenge. It just serves to frustrate the player to no end.

Speaking of frustrating the player, the ground controls. Now if you want to feel what it would be like to play an entire game on ice, then 3D Sonic games are for you. Your character has such terrible traction when in motion that you spend half of the time just trying to stay on course. And of course this issue is only made worse when you need pin-point accuracy or trigger like reflexes for certain jumps/path.

Everything’s not awful in Shadow’s land though. I found the controls for the vehicles (The few I got to pilot) to be pretty solid. They did what I needed them to do and never worked against me. Also… well it makes it easy to select stages!

Speaking of stages, the game is divided into 3 paths (more on that in a second), good/bad/normal. Each one has its own objective and whichever you complete first dictates what levels/paths open up. It is an interesting dynamic as you can go through a stage doing all the tasks and just decide at the end, or you can focus on one and ignore the rest. It does add a level of replayability. 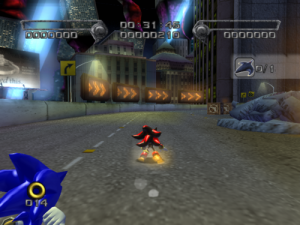 And the game has no shame in exploiting that. While I only completed the game once (heaven knows I wouldn’t subject myself to it more than that), I did Google it and found out that there are 10 different endings to the game. And only AFTER seeing all 10 endings could you unlock the actual final ending/boss/stage in the game. This forced replayability to get all the content is the type of padding in games I absolutely loathe. I don’t want to go through the same stage 3 times just so I can open up all the paths so that I could see all the possible outcomes so that I can finally actually see the ending that I paid for. Imagine if a movie forced you to go to the theater 10 times, and only after having your ticket stamped that 10th time, you get the true ending?

It helps that the game story… didn’t really have much to grab me the first time through. Shadow was introduced as a bit of an enigma in his original outing so this game serves to flesh out his back story. From what I gathered, Shadow is either a creation of Dr. Robotnik (a clone of some sort) or he is an alien creature that was sent down as their agent. I’m not 100% sure to be honest.

If you would allow me a high-horse for a second. The entire Sonic the Hedgehog franchise was started as an anti-Mario game. Whereas Mario emphasized exploration over pure speed, Sonic was all about getting from start to finish as fast and as efficiently as possible. So the fact that SEGA has continued to add more and more stories to these games just baffle me. It really just kills any momentum the game may be building, which isn’t a whole lot in this case.

Anyhow back to the story, as I mentioned before the stages are divided into a good/bad/normal path. As you complete certain objectives, different paths open up. From my understanding, each path comes with its own set of cutscenes and a variation on the game’s story. This is good and bad since there seems to be little flow at times. Like the Black aliens (they are only referred to as black creatures) disappear like half way through the story if you go down a path with Robotnik, which I thought was a bit strange. There’s also a 3rd party that pops up randomly with GUN. They seem to be the government agency that is attempting to stop Shadow. 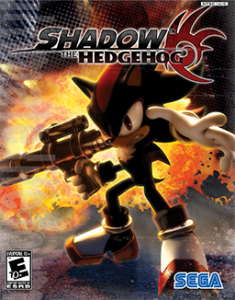 In addition to controlling your story path, good/bad also works into your super meter (I really didn’t bother learning the proper name), this is a gauge at the top of the screen that fills up with good or negative energy depending on what you are doing. Unlike other games that use such a system, it doesn’t appear that doing one negates the other. Meaning you can go about filling both the good and bad meter at around the same rate. I never took stock on which side was good or bad, but once filled one would allow you to pretty much run rampant over any nearby enemies while the other was kind of like a quick guide through the stage. They were fine additions and I used them a handful of times, but do very little to save the game.

Going into Shadow the Hedgehog, I knew it had a reputation as a bad game, but it wasn’t the stuff that bothered me. Sure, there are some eyebrows to be raised in SEGA giving their black hedgehog a gun, there’s some questionable decisions with including vehicles when Sonic and Shadow can outrun them, but neither of those things bothered me. Really what bothered me is there isn’t much here. There’s nothing to cling to, and probably push you through completing this game multiple times. The controls are broken, the story is jumbled and a mess and the game play just isn’t that interesting.

It has been more than half a decade, I assume most of you have already passed on this game. But if you had any type of curiosity about it, I would highly recommend just avoiding it.