This isn’t the best way to introduce you to a feature, but I’m not entirely sure what this will be. I will share what I do know. In anticipation of The Dark Knight Rises release on July 20th, I will be watching my collection of Batman movies. I know that I will be watching some for the first time, mostly the 1940s serial series. And I know I will be sharing something about the movies on the website. I, however, do not know if I intend for them to be analysis of the movies, reviews or just general musings. It may even vary from film to film so work with me. 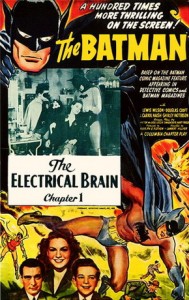 With that long-winded non-explanation out of the way, the first stop on our trip is 1943. The Dark Knight was only 4 years into his crime-fighting spree in the pages of comics, and Columbia decided to serialize his adventures. Lewis Wilson would become the first man to step into the cape and cowl on the big screen. Accompanied by Douglas Croft as the Boy Wonder, Robin, and William Austin rounding out the Bat-family as Alfred Pennyworth.

Now obviously, I wasn’t around when this serial first released, heck nor were my parents! So I have to rely on Wikipedia for any historical significance. And it does seem like this serial brings a lot to the table. The two most important ones seem to be the introduction of the Bat-Cave. In this serial, it functions more as Batman’s prison than his work place in later adventures. It is also accessed through a grandfather clock, later on, the entrance would be hidden behind the clock. The other change was for Batman’s butler, Alfred Pennyworth, who until this serial was drawn as a giant, bumbling man. Thanks to Austin’s performance, his appearance would trim down a bit and would add his trademark thin mustache.

That’s what the serial added, on the other side there were several key trademarks that were missing from the serial. The first, at least to me, is the utter lack of gadgets. Sure, it can be a bit ridiculous at times (looking at you Adam West!), but there isn’t a Bat-thingie at all in this movie. Even more shocking, was the lack of batarangs.. like at all. This also falls under the gadget’s category, but there is no grapple in the serial either. Not the automatic one nor the bat-line/rope. There’s no Batmobile in the movie either. Instead, Alfred drives Batman/Bruce and Robin/Dick around throughout the 15 chapters. Finally, and most peculiar is the lack of Commissioner Gordon. Instead, we get Captain Arnold, who really serves little purpose in the serial.

So that’s what’s new and what’s omitted. What about stuff that was just bizarre. Well the two biggest changes to me were 1)Batman is a government agent in this serial. Perhaps, it is due to the time period or the fact that we wanted him to work with law enforcement, but he isn’t a vigilante. He even phones in his captures to the police. The other is more of an omission or my terrible memory, but we are never told why or how Bruce Wayne is rich in this serial. Traditionally, he inherits Wayne Enterprises from his parents, but there is no mention of the company in any part as far as I can tell. There are hints that he is well-off including the fact that he has a butler, a secretary, and appears to be able to leave work whenever he deems it necessary, but no real explanation as to what he does. Just a baffling omission. 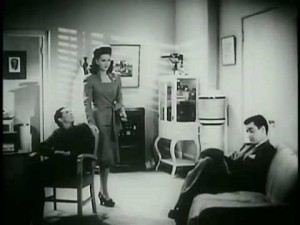 There were changes and omissions. There were additions and cosmetic make-overs, but how do the actual serials hold up? I have to say remarkably well. Being almost 70 years old, they are still pretty enjoyable. Sure they are a bit cheesy at times, and REALLY racist (Batman calls the main villain a Jap like 5 times in the final chapter), but they were a product of their time. It was perhaps one of the more grounded Batman films as well. Sure there are “zombies” in it, but they are more or less mind-controlled humans and not the living dead. Most of the film has Batman battling with gangsters in and out of costume. And the main villain, Dr. Daka isn’t a man man or a supernatural entity.

One element that is a bit iffy is the actual serial nature. I guess when these premiered the cliffhangers were fun and amusing, but watching them back to back to back (There are 15 chapters!) really dampens their effect. Especially since the writers sometimes find the cheapest way out of them. Like there are several explosions Batman just misses out on. There’s a time when something was going to fall on him and he just rolls out of the way. And there were two (To my memory), in which he is just lucky the building structure falls in such a way to protect him from any harm! 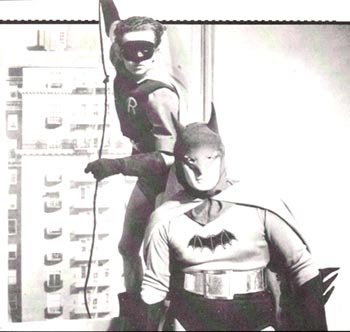 It also doesn’t help that each chapter spends the final minute or two showing what’s going to happen next, and then the next part spends 2-3 minutes recapping what happened at the end of the LAST chapter. Though it did have some fun music, and always knew was near the end when it started to kick in.

The costume design is hard to judge, but I can only imagine that being in black and white really helped. It still looks cheap as hell, but I assume a lot worse in color.

So that was Batman 1943, not a bad set of serials, but far from the greatest Batman adventure put to film. I think its worth checking out, as long as you take it as a product of its time, and try to ignore the overt racist tendencies towards the Japanese. And the fact that a lot of the Batman mythos was still evolving.