If you are into urban city building simulators you might have already seen the announcement trailer of Cities Skylines, but if not here it is again first:

As you can see one of the big touted features is that you can play offline, fighting directed at the last SimCity title. Are these justified though? During Gamescom I was shown the game by the developers. The studio making this game is Colossal Order who were previously behind the Cities in Motion games. When they talked about their game the game, takeaway was that they want to allow you to build whatever you want. Their game is just a big sandbox for you to create your dream city. 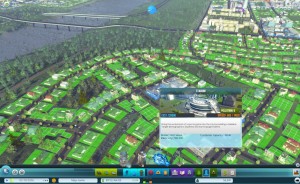 This idea was immediately demonstrated by a very intuitive looking road building tool. It was completely freeform and allowed you to build all kinds of crazy road structures. But a city is nothing if it just consists of streets, you have to have some room for people to live and commercial areas. Well how do you do that in this game? In the trailer you might have seen that roads have these squares on the sides to them. These are basically your city blocks. You can easily mark a side of the street as a residential area or a commercial one, but it doesn’t end there. In this game you have different brush tools which let you mark areas however you want. So you think it might be a great idea to have a residential area with one little square in it which is commercial, you can totally do that. 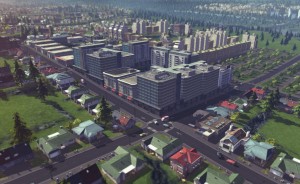 Another interesting tool was the district brush. With that you could basically just draw on the map to create different districts within your city. From there it was possible to then go in and actually give each district different policies. If crime is lower in one district compared to another maybe you want to adjust how much money is being spent on it there. All their tools seemed to be this easy and intuitive with lots of options for the player to customize their city. 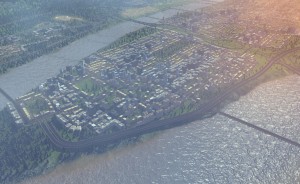 One of the biggest complaints levelled at the last SimCity was the small map size, well you will probably not have to complain here. The map was huge. In the area they showed off you could have probably fit 4-6 cities from EA’s game in it. Should you still need more room there is always the possibility to expand, just acquire some map squares next to your city and you have even more room to build.

They also give you a map editor which makes it possible for you to create your own land. In fact they will have very deep modding options right from the start. People will be able to create everything from their own buildings to cheats if they want to. All of this will be easily sharable via Steam Workshop. This is also why they won’t have real monuments in their game, because they think the community will provide more than enough of them. There are still monuments but they are fictitious and act as achievements for your city.

Overall I came out of this demo impressed. Colossal Order seems to know what people who love this genre want. When it comes to the content and the mechanics the whole game already looks very sound. We will have to wait though how the underlying simulation will hold up once the game comes out in Spring 2015. If that part also holds up we might have a worthy SimCity successor in the form of Cities Skylines.