PokÃ©mon Black and White Versions 2 on the Nintendo DS hand-held system are the direct sequels of the popular PokÃ©mon Black and White, released on the Nintendo DS back in 2010. Black and White 2 play much the same as the original Black and White and use many of the mechanics of past entries in the PokÃ©mon franchise: the game begins with a young boy or girl setting out on his or her adventure with one of 3 “starter” PokÃ©mon in order to catch as many PokÃ©mon as possible to defeat the 8 gym leaders and conquer the PokÃ©mon League while simultaneously thwarting the plans of Team Plasma, an organization of thieves bent on world domination. The story is simple and familiar and any longtime PokÃ©fan will find himself right at home. For newcomers the simplicity of the story will allow for them to get sucked into the addictive gameplay and put them on track to becoming life-long fans.

Continuing with Generation V, there are a total of 649 PokÃ©mon at the player’s disposal. Large numbers of PokÃ©mon across all generations are available for capture in the wild. As a fan who grew up with the first generation — the original 151 — I was pleasantly surprised with the number of older generation PokÃ©mon I stumbled upon. I found Black and White 2 to have a stronger balance of old and new PokÃ©mon than previous installments in the series. With so many PokÃ©mon to catch, players will find themselves putting a serious number of hours into the game without realizing it — spending hours upon hours trying to catch and train their favorites. The most crucial aspect, many would agree, is how the battling system measures up. As one would expect of PokÃ©mon, the game delivers. With new PokÃ©mon also come many new moves, and changes to existing attacks, to give greater variety and aid in balancing the game to create fair battles. There are hundreds of moves to teach your PokÃ©mon and a variety of ways through which one can power up his PokÃ©mon. There’s the traditional learning by leveling up of course, and TMs and HMs remain a strong presence. Other popular, but more advanced methods, such as breeding still exist as well. However, Black and White 2 bring back the “move tutor” function originally found in PokÃ©mon Crystal but was removed from later installments. Essentially, trainers collect different color shards throughout their journey and trade them in in exchange for useful techniques for their PokÃ©mon. With hundreds of PokÃ©mon and moves to mix and match, there’s an almost endless amount of team combinations to be made. 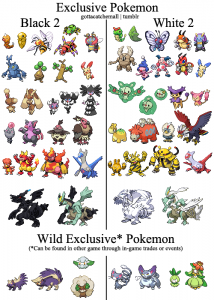 While I enjoyed the sheer number of Pokemon on display, I feel that the designs of the Pokemon have grown weaker with each new Generation. There were few Pokemon designs in Black/White 2 that stood out as exceptional to me.

Other features were also added that were not present in the original Black and White games. A challenge mode has been introduced, which raises the strength of opposing trainers; “legendaries” from Hoenn and Sinnoh are available for capture after defeating the PokÃ©mon League; a memory link feature has been added, allowing the player to view flashbacks from NPCs to learn more about events that have passed since the original games; new locations such as Aspertia City, Virbank City, Floccesy Town, Lentimas Town, and Humilau City have been added to the Unova region. Some aesthetic changes have also taken place — a few characters receive redesigns, locations have received additions, the battle menu and PokÃ©dex have also been revamped as well.

From a story perspective, I didn’t play the original Black/White release, but found that it was easy enough to get into Black/White 2 and not feel confused or overwhelmed. I was able to exchange notes with a friend who had played the original games, and from our conversations I gathered that there isn’t a ton of a new content to warrant someone picking up this release, but I still found the game to be remarkable fun.

That isn’t to say there aren’t any differences between the two with the two biggest being the Pokemon that are available throughout the course of your quest and the story which deals with the consequences of the original.

Post-game options include new locations such as towns, routes, and previously blocked caves opening up for exploration, a brand new battle institute to test your skills as a trainer, numerous new tournaments in the PokÃ©mon World Tournament that allow the player to battle past and present gym leaders from all regions and across all generations, trainer rematches, and a round 2 in the PokÃ©mon League against the Elite 4 with significantly higher level PokÃ©mon. Between the main story and post-game options available to players, it’s easy to pump 50+ hours into the game. Trading and battling with friends or other players via the DS’s infrared and Nintendo Wi-Fi functions also keep players coming back for more. Black and White 2 is compatible with Black and White and after the main story-line is complete can transfer PokÃ©mon from Heart Gold and Soul Silver, Diamond, Pearl, and Platinum versions. Such a large connectivity allows players to reuse their best PokÃ©mon from their older games as well as their friends’. It’s a great function — one that I’ve taken advantage of with friends on numerous occasions for a lot of fun.

Rating: KING — the addictive gameplay will keep players coming back for countless hours of fun, alone or with friends. With different PokÃ©mon available, improved graphics, and new locations and story, Black and White 2 set themselves apart from their predecessors. The game is available for purchase at most retailers for $34.99. For that price, with the amount of hours a player can expect to put into it, this game is definitely worth it. I recommend anyone with a Nintendo DS or 3DS pick up a copy.