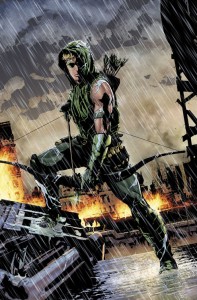 Comics are an interesting medium. They are so steeped in history and continuity that can be both a burden and a gift. What happens when you find the direction you aren’t taking isn’t quite working? Over the decades, comics have invented and used all types of neat little tricks to accomplish this, most of which deals with resetting or destroying the statue quo. Green Arrow 17 seems to be that issue that looks to right the wrongs of the current series, even though I was a fan of the direction.

Green Arrow 17 opens up with our hero, Oliver Queen, alone in the desert (I know a bit of a cliche), alone, tired, fatigued and broke as he laments. As he passes out in the desert, we get a flashback to Oliver bursting into Emerson’s office to scold him for losing his family’s company. Their chat however isn’t that long as a rival archer takes Emerson out from an adjacent building, but things are only beginning for Oliver as his two techno-sidekicks, Jax and Naomi, are caught in an explosion at Q-Core branch. Yes, within the first 10 pages or so of the story, the entire supporting cast of Green Arrow have been killed or presumed to be killed, he lost his “Q-branch” and his company/money. If that’s not wiping the slate clean, I don’t know what is.

Which also leaves the back half of the issue setting up the new status quo and foes for the future of the series. I won’t spoil that too much, partially because it doesn’t seem that radical so far, but also seems to want to tie into the TV show a bit with a bigger focus on what happened to him on the island.

It’s a brave direction, and I kind of applaud DC and the writers for going through with it. Really, if something isn’t working, there’s no sense in trying to get it to work, but I also hope it isn’t an avenue/technique they use all the time. I’m also curious to see what type of stories we get coming out of this. Like I mentioned before, I was a fan of the more light-hearted Green Arrow tale, and he was kind of like the James Bond of the DC universe. This turn seems to be going for those key words of darker and gritter, but let’s hope that I’m wrong.

The art in the book worked for me. Generally, I’m not a fan of the rougher art, but in the context of the story it worked for me. Here we have a character who is having his entire life ripped apart around him, it makes sense that everything is clear and defined for him. Instead, it is rough, it’s full of shades and murky and muddy colors. Andrea does a fantastic job with this on several key panels as well including one of my personal favorites when Ollie emerges from one of his spare safehouses.

Recommendation: Buy It– Green Arrow 17 is a brave new start for the series, and I for one, am extremely curious to see where Lemire takes the book. I say hop on and see where the ride goes!