NYCC 12: Talk of the Town: Avengers: Battle for Earth

At New York Comic Con this weekend, I got to go hands on (or hands off, do people still make those jokes?) with Marvel’s Avengers: Battle for Earth on the Kinect.

The game could best be described as an team-based, arena fighter based on my limited time with the demo. In it, you can play either Versus the computer (in tutorial, I think) or Versus another player. 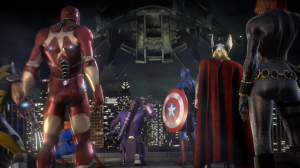 During the tutorial segment, you control Thor and The Hulk as they take on Loki and Venom. You control the game, as one would expect, with your body. You are given various types of commands that you can carry out. For example the hulk is able to raise one arm and slam it into the ground to send a shockwave to his opponent. You can also spread your arms out like getting ready for a hug, and the Hulk will pick up a rock, bring them back together and he tosses them at his foe. Thor has a similar moveset, which is of course customized to Thor’s power and the use of his hammer.

You get the general gist of it. There are two additional pieces to the combat, the ability to “launch” your opponent with certain moves. Once they are airborne, you are given a prompt to punch them as much as you can before they hit the ground. My record was about 15 hits! The other is the ability to tag your partner in and out. In order to do this, you simply raise your left hand (not sure if it switches depending on your dominant hand!). You want to do this because it seems like you win a round once you KO a character, not both. Which I think is different for a tag based fighter.

The single player demo mostly functioned as a tutorial so the CPU hardly fought back against you. While I didn’t get to play, I did check out a few Vs matches. Those proved to be a bit more interesting, but quickly broke down into players spamming the moves that the Kinect most often recognized. Like with Iron Man, his hand blasts.

There in lies the problem with the game, and really most Kinect titles. The device, for as wonderful as the technology is, just hasn’t really proven to be effective at reading all of a player’s movements. Some games are better than others at hiding it or being designed around the limitation, but a fighter isn’t one of those genres that you can hide it in. At times, your character either won’t begin an animation needed for a move (like Thor lifting his hammer to set up his lightning) or the game won’t recognize you finishing the animation. Leaving your character in a funny state as they wait to attack.

Like I said the single player stuff mostly served as a tutorial so the CPU didn’t fight back much so it wasn’t a problem, but unless this is the default difficulty for the game (Which would honestly make for a boring game) then I can see the controls being more frustrating than funny. Ironically because both players will be suffering the same problem, I think that the Versus mode would be a lot more interesting.

Avengers: Battle for Earth is far from a TERRIBLE game, but it is really hard to recommend based on my limited time. Perhaps if you’re a fan of the characters, and can find it for a decent price worth picking up to play with friends. The game is due out soon for the Xbox 360 and will launch during the Wii U’s launch window.