NYCC 12: Talk of the Town: Sonic And All-Star Racing Transformed

Sonic and Sega All-Star Racing was one of the more interesting entries into the kart-racing genre earlier this generation. SEGA is looking to improve on the formula by taking the battle to the air and sea in this sequel. I got a chance to go hands-on with the title at NYCC and came out impressed and slightly let-down on a single aspect.

The title of the game takes its inspirations from the game’s newest feature, the ability for your kart to transform for air and water travel. Which is a neat idea, though kind of had some thunder stolen when Mario Kart 7 did something slightly similar last year.

I was excited for this, I had visions of Diddy Kong Racing dancing in my head, but based on the brief demo, it seems like the transformations are area specific. Or in the case of the demo, lap specific. The first lap of the race had everyone driving in karts and played at as normal. Somewhere along the race though, parts of the map got submerged in water and a portion of the second lap sees you racing in your sea vehicle. Not really sure what you would call it.. a hoverboat perhaps? You don’t actually go under water so it isn’t a sub. The 3rd and final lap saw you take off in your plane to complete the lap.

Again, it’s a cool mechanic, but was hoping it was triggered in another fashion. Perhaps, it was just the stage on display (And I’m sorry can’t remember which it was) that had this specific order of change. 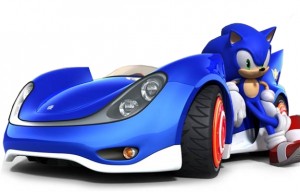 Aside from that, I found it to be a solid and fun kart-racer. Seeing Sonic drive around in a giant car (Really couldn’t have gotten him like a smaller vehicle) is still kind of humorous to me, but there are a lot of cast additions that have me excited including Vyse from Skies of Arcadia who wasn’t on display at the show.

If you’ve played a kart racer before, you know the gist of how Sonic and All-Star Racing Transformed works. The biggest difference from the standard bearer is how drifting works. I don’t remember the specifics, but this is slightly more skill-based than the Mario Kart version. The game also features a different set of weapons compared to the Mario Kart franchise.

If you’re a fan of Sonic and Sega All-Star Racing, you’ll find a lot more to love in this version. If you weren’t too hot on the original, it doesn’t seem like there’s enough here to really change your mind. I’ll be picking up my copy this November. It will be available on like every major platform!