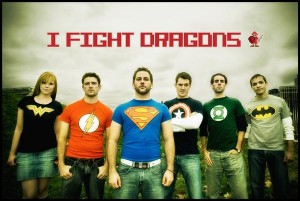 Video games are what really allows many of us “nerds” to blow off steam either by owning people in “Call of Duty,” helping Link save Zelda, or using a batarang to knock out one of the Joker’s goons. Many of us are the Nintendo generation growing up on Game Boys and Nintendo Entertainment Systems. We all know the chimes and sounds of these systems and it’s amazing to think that video game music went from being a few notes to complete songs. There is a specific type of music that could become very appealing to us from the Nintendo generation, as well as many other gamers. The type of music is called “Nerdcore” sometimes “Nintendocore.” Basically, this is a genre of music that takes today’s rock music and adding in chiptune, the few note songs from classic video games, and creating a very unique style. There is one band recently that is actually creating quite a bit of buzz, and they are kind of bringing this Nerdcore mainstream.

I Fight Dragons is a Chicago based band that has gathered quite a following and has done well in a relatively unknown genre, that seems to be finally getting some notice. I Fight Dragons is a pop/rock/metal/nintendocore band. I band released their first album titled KABOOM! 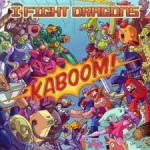 I Fight Dragons really uses a lot of their tones from the Game Boy and NES systems, which actually work very well for their songs. I really enjoy how the album starts off with a 30 second intro track that is basically just tones, it really kind of sets it up as yes we are going to use these simple tones and make something that will grab your attention. The album has some very fun songs that become very catchy, probably the mixture of the modern rock sound mixed with the Nintendocore. The album flows from one song to another on the album very smoothly and allows for a very easy listen. It seems to be one of those albums that you could still extremely enjoy even if the lyrics were eliminated. Speaking of lyrics, that happens to be one of my issues with the album, I understand that the songs are supposed to be goofy and fun, but the lyrics really do nothing to keep you wanting more. The band needs to ease up on the WHOA’S. Lyrics can be fun at times, but after awhile the lyrics just become very forgetful. This should not drive people away from the enjoyable listen that this album is. There are plenty of great songs, take “The Geeks Will Inherit The Earth” this song is fun, plenty of Nintendocore to please you, and one of the better lyrically songs on the album. Also it has a very fitting music video for their genre.

I Fight Dragons is the band the genre needs to help make it more wide spread, but is it something that can really last. I would hope so because overall this is a very fun album to just listen too if you are in that happy mood. It is very upbeat, fun, and excited. It is a type of music that will take you back to you childhood and remind of you of when times were simpler. I could have asked for better lyrics, but I understand that this is supposed to just be a good time. Overall, I would say it is a must listen for any nerd, or any videogame lover.

Also, I Fight Dragons will be playing in the 2012 Warped Tour, so there is your chance to see them live!