Now that Sony has officially pulled back the curtain on PlayStation All-Stars Battle Royale, they become the second platform holder to create their own brand of mascot brawler. With Nintendo already finding tremendous success with the Super Smash Bros series, Microsoft is the only company that hasn’t thrown their hat in the water. I know most gamers would scoff at the idea of a Microsoft mascot brawler, “Will it just be Master Chief vs Marcus Fenix?” and while that is a fair compliant on paper, their library of characters is a bit deeper than that. We examine what exactly Microsoft already has in its fold for such a game.

First the name. It may not seem to be the most important thing in the world, but PlayStation All-Stars Battle Royale doesn’t exactly roll off the tongue, and really it has no Sony correlation. Compare it to Super Smash Bros (we’ll ignore Melee and Brawl since they are sequels), the name is simple enough. It gives you an idea of what to expect from the game, but most importantly it ties into Nintendo’s own history. I don’t think you’ll get any argument that Mario is Nintendo’s most iconic character. And his most iconic line of games? The Super Mario Bros series. So you tie in the name with that franchise, and you get something that is distinctly Nintendo. And a minor thing, but cool is that the middle word is also 5 letters each so visually they appear the same.

Now what does this have to do with Microsoft? Well luckily enough for them, they have the perfect name for a fighting game, which would tie in perfectly with their most marquee franchise. Combat Evolved, which is the complete name of the original Halo (Well Halo: Combat Evolved). It evokes thoughts of a fighter and it goes back to Halo especially in the wake of the 10 year anniversary re-release we got last year. It is also a fairly simple name that rolls off the tongue.

With that out of the way, let’s get to the real meat andÂ potatoesÂ of these games… the characters. While it would be easy to say Microsoft lacks the depth of either Nintendo or Sony (And it may be true), they do have their share of characters who are known to the general public. 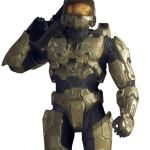 Let’s get the most obvious out of the way, Master Chief. The protagonist of the Halo franchise is Microsoft’s most recognizable and iconic character. He has an arsenal of moves and weapons so he would be pretty easy to transition into a fighting game. They could even “clone” him in the games and give him various armor abilities or load out from Reach to make for distinct characters. 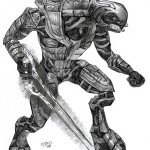 In addition to the Chief, Halo can offer up a ton of other interesting characters, but to not bog the game down with generic grunts and the likes (there are no playable Goombas in Smash Bros), I will only offer one more suggestion, and that is the Arbiter. While his moves would look similar to Chief’s on paper, the designers could arm him with a ton of alien weapons in the game, and of course give him the plasma sword. He was a playable character in the series as well, and a bit more agile than the Chief.

Next up would obviously be the characters from the world of Gears of War. We can pick from such staples as Marcus Fenix, Dom, Cole Train and Baird! Granted, it would really only make sense to have one of those characters in the game since there would be very little toÂ differentiateÂ them outside of their personalities. And since Marcus is the main hero of the franchise, it should be him. Again like Master Chief he would use a combination of long-range firearms and hand to hand combat. Though he would also come prepped with the franchise’s trademark Lancer and maybe a torque bow!

The last of Microsoft’s major franchises would of course be Fable, who I don’t believe has a name. It would be cool, but really odd if Microsoft allowed you to import your character/name from your Fable save files into this fighter. IT would give everyone their own unique stamp, and they could probably program for all possible moves. It would encourage people who hadn’t played Fable to check it out or at least create their own character from scratch. 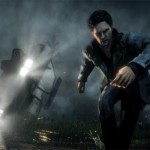 Before we transition to some of Microsoft’s other properties, I also want to bring up Alan Wake. An interesting character since you do spend most of your time trying to avoid getting into too much trouble. He offers a distinct look, and has his magical flashlight as well. And Microsoft is really trying to make it into something major.

Now for the next portion of their roster, we turn to a studio that may no longer live up to its pedigree, but does have a history of rich characters. That would be Rare. They bring more than 2 decades of experience and characters to the fold. 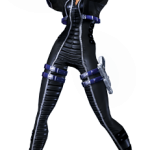 We’ll start with perhaps their most prolific character to date, and oddly enough the first female on our list, Joanna Dark, the star of the Perfect Dark series. It seems like a lot of characters in the game so far will wield some type of fire-arm, and Ms. Dark is no different. Though unlike Chief and even Marcus, her weapon arsenal would be more scientific in nature instead of alien or brutal. She would also have a much mightier chopping hand than either of the two. And perhaps some other gadgets from her two adventures!

Next comes Rare’s dynamic duo, Banjo and Kazooie. Now it is up to the designers on how they want to work this because they could offer Banjo-Kazooie as a single entity… or offer a Banjo/Kazooie duo and Kazooie on her own. While she doesn’t often get to travel on her own, there have been occasions where she does detach from Banjo for some action, and it would help pad out the roster just a little bit more. 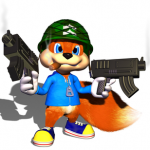 Another alumni from Diddy Kong Racing is of course Conker, the star of Conker’s Bad Fur Day. The squirrel with a most nasty attitude. Conker would be a mix of hand to hand combat, using his trusty frying pan, some animated guns and perhaps turning into an anvil to crush his foes. If this game employs a super move of any type, it can also involve him getting extremely wasted.

While she has only appeared in a single title, which was a launch game for the Xbox 360, we would also include Kameo in this title. One she adds more female presence to the title, but she also has an interesting set of moves since it varies on the form of the creature she takes. She would favor a more well-rounded experience since she can have melee, speed and even long-range when the situation arises. This would be balanced by a longer transformation time and the obvious weakness each state would possess.

I would love to include something from Viva Pinata, but since I’ve never actually played the games, I’m not sure what they could offer… offensively. Though Nintendo made Mr. Game and Watch into an effective character, as well as ROB so anything is possible.

Now we’re going to hit a bit of Rare’s obscure history to dig up some characters. First up, since he most recently made a re-appearance on Xbox Live is Jetman from Jetpac and JetpackÂ Refueled. Retro-fitting his moves would be interesting as for the most part, he came armed with a laser gun and just tried to gain fuel for his ride. We suggest of course using the laser pistol, but allowing him to dump fuel on his enemies. This can either slow them Â down or trip them up depending on how its used. And he could even chuck parts of his spacecraft at his enemies to do extra damage!

The next character hasn’t been seen since the original Xbox, and even then his game came out near the death of that console. This character would be Cooper Chance from the game Grabbed by Ghoulies. His default abilities would work with his ability to turn most real world objects into weapons. Most likely, he will use a stick or a broom handle as his default weapon. He could also down various types of soups to give him more amped up abilities. Including his energy boosting soup and his freeze soup.

I would delve further into Rare’s franchise with stuff like Killer instincts and Jet Force Gemini, but Rare and Nintendo’s history, always confuses me as to what is and isn’t usable between the two companies!

Finally, we touch on one of Microsoft’s most recentÂ acquisitions, who come with their own stable of characters and most of them relatively new that would be Twisted Pixel GamesÂ . While most of their endeavors on the Xbox platform have been on the digitally space, they have carved out quite a market of characters for themselves. 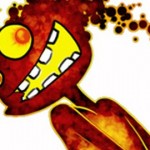 The first is a duo, a happy couple in gaming, Mr and Ms. ‘Splosion Man. While they aren’t an “official” couple, they do share a similar moveset, which is to say they both explode… a lot. Combine that with some melee abilities and you get an interesting character for any fighter!

Next is Twisted Pixel’s most recent creation, the Gunstringer. An Kinect tile, in which you control a puppet wielding some mean firepower. Once again, we have a character who would wield a fire-arm of some sort (maybe this crossover should just be a shooter instead of a brawler!). But he should also be able to use his status as a puppet to his advantage. Maybe being able to use his cords as a whip or a way to tie up his opponents in some fashion. It would be logic-breaking, but it could work.

Last on the Twisted Pixel list would be Captain Smiley from Comic Jumper, who surprisingly enough comes loaded with dual wielding pistols. At this point, let’s just assume he’ll have different combat moves like so many on thisÂ list!

Finally, finally finally, we come to Avatars, your own home-created character for the Xbox. It would be interesting to see how they would translate this character into any type of game, but I would offer one suggestion. Make it like a Kirby type character who is able to absorb other character’s movesets, perhaps by donning a special t-shirt or something. It would be a fun twist.

Anyhow, this is just a basic look at the characters Microsoft could dig out of the closet if they wanted to pursue Sony and Nintendo’s brawler franchise with their own. I’m sure there are characters and moves that I hadn’t even thought of so feel free to add your suggestions!