The 3DS eShop has finally started coming into its own with a ton of unique, quirky and novel downloadable titles. AiRace Speed by Qubic Games is one of the latest entries on the service, and looks to give players a true thrill with high-speed racing. Let’s find out if it’s worth your money!

With a name like AiRace Speed, you could forgive me for thinking this would have been a futuristic racing title in the vein of F-Zero, Extreme-G and Wipeout, but instead we get a futuristic time-trial game. After starting the game though, you quickly get over that initial disappointment. 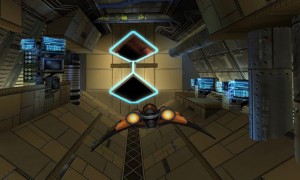 What you will find in this package, is an extremely tight, extremely fast paced series of courses that tests your dexterity, reaction time and daredevilness. You speed through 18 various stages as you put your vehicle through its pacing with various types of stationary and moving obstacles.

There are two types of stages on display in this game. The first is a pretty straight-forward scenario where you are trying to complete laps in as short as time as possible. The other is more of an endless run where you try to go as far as possible on 3 lives as you can. The game does a decent job with both, though you will find a lot more of the former in the title.

The courses offer some unique challenges, though I did find trouble judging height of some obstacles at high speeds until it was too late. I felt like a few of the courses suffered from the player memorizing the set-up so that they knew how to react to avoid crashing.

Crashing in this game is the big no-no as it not only forces you to reset to the nearest checkpoint, but a 3 second penalty will be added to your final time for every crash you encounter. Luckily, the game is wise/kind enough to reset the clock for you to when you crossed the checkpoint so you aren’t double penalized for screwing up. And if you want, makes it easy to restart a track once you get a better understand of the layout. Trust me, you’ll need it as I went through tracks multiple times learning all the shortcuts and best ways to avoid crashing. And I found that to be the most rewarding part of the game. 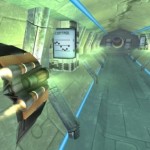 Once you figure out the course, it’s time to start aiming for those high-scores. The game does feature a leaderboard system, and you are able to see it after completing a race or picking a course, but I felt like the game does a poor job of highlighting it. You aren’t shown the leaderboards after completing a stage nor are you shown it when picking a stage. You need to manually enter it, and while a minor thing, for a game centered around high scores I feel like it should have been featured more prominently at the start and end of a race.

Speaking of the menus and minor gripes, I dislike the fact that the game doesn’t allow you to use the analog stick to navigate it’s menus. Seems like an odd oversight since you can use it for everything else in the game.

Actually, I would say the overall presentation of the game seems rather basic. While they do a decent job of building a cohesive “steel” feel for the title, it does kind of make it seem personality-lite. Even the music isn’t really there even when it plays.

Â Review: 3 (Out of 7) – There is a fun game here, and 5 bucks isn’t a steep asking price, but it just feels so basic and never pushes beyond to be something special.Â