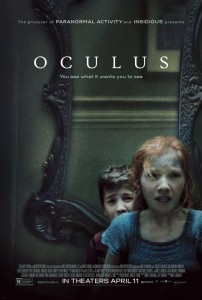 You know the moment in most horror films when a character either looks up from the sink or closes the cabinet and are frightened to see someone standing behind them, and look behind to realize it’s only their imagination? Oculus seems to fixate on that singular image, and poses the question what if it wasn’t their imagination but an evil force residing within the mirror?

The concept seems a bit hokey, and trust me I was apprehensive going into the film, but the film does a terrific job with its core concept and creates a very intriguing psychological horror film.

More than the conceit of an evil mirror is the dual-storytelling that features Karen Gillan and Brenton Thwaites in the present-day as brother and sister,Kaylie and Tim Russell, and Annalise Basso and Garrett Ryan as their younger counterparts. The story jumps between their original encounter with the mirror more than a decade earlier, and their current-day interaction with it as they attempt to prove its evil powers.

Much like the Friday the 13th series, the strength of the time-spanning storyline is how organically it switches between both time periods until eventually the movie begins to play tricks with not only its characters, but it’s audience on whether they are encountering something through the lens of the present-day or as it happened in the past.

The leads do a pretty solid job of taking us through their breakdown. And there are some truly horrific scenes with Katee Sackoff as Kaylie and Tim’s mother.

It’s a modest horror film, and for all the better. There aren’t a ton of elaborate scares or setpieces, and leaves a lot of it in the unknown.

Review 5 (Out of 7) – Probably the first WWE Films really worth checking out.