To many, Death Note may seem like another live-action adaption of an anime that Hollywood butchers, but those people are only thinking with their brains. What they need to think with is their imagination because Death Note proves to be the ultimate send-up to the 2000s class of movies. 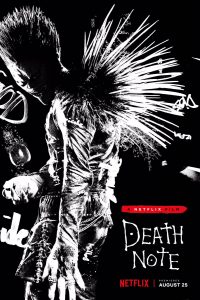 As a homage to a decade just gone, Death Note does a commendable job of serving as a throwback to that era. We get the unintentional comedy of the Final Destination-esque kill cams when Light is first using the book. And trust me, there is no way those deaths weren’t intended to be played for anything more than comedy.

Then there’s the “main” thrust of the movie being the teenage romance between Light and Mia who bond over their mutual love of seeing people be murdered, what young love isn’t? But yeah the movie starts with a montage of everyday life in high school and has the “outsider” in Light who has a thing for one of the hot girls in school. There’s a school bully and a principal that is unreasonable (I still don’t get why Light gets detention, but whatever). This portion of the movie seems like every post-American Pie raunchy teen comedy.

The detective bit is harder to draw parallels to since it’s a very old trope in Hollywood. The cat and mouse game most reminded me of… well nothing. Sigh, okay let’s break character for a second. Light is an idiot. I mean sure the movie wants us to believe that he is an uber-genius but nothing he does in the film paints him as anything more than an idiot. I get that they needed to truncate the anime’s story for the sake of the movie, but Light doesn’t really offer any threat to L. The fact of the matter is L figures out pretty damn quickly and Light and Mia’s cover-up are sloppy jobs.

Finally, and somewhat most out-of-left-field, is the movie’s Ocean’s Eleven-esque climax. If you’ve seen any of the Ocean’s movies, you know how they end. You see this big setpiece/heist play out and you think a million things have gone wrong and that they’ve possibly failed their mission. But while you were watching it unfold, the movie was playing a sleight of hand on you and then through narration and flashbacks you are shown what actually happened. Well Death Note apes that ending pretty hardcore. Like I mean apes it’s so much that I’m surprised George Clooney wasn’t in the hospital room nodding along to Light’s tale.

Don’t approach Death Note as an anime adaption. Instead approach it for what it truly is a love-letter to the action, comedy, dramas of the 2000s. You’ll come away appreciating it a lot more!