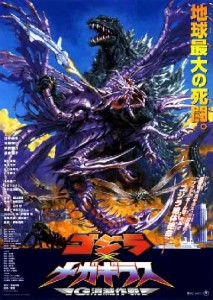 The second film in the “Millennium” series of the Godzilla franchise, Godzilla vs. Megaguirus, opens with a startling revelation: The events of the previous year’s Godzilla 2000 never happened. No longer shackled by sequel continuity, the films of the Millennium series ditch large amounts of exposition in favor of episodic, no-frills stories involving the beloved radioactive lizard. While this more open approach generally led to a surge in creativity in the Millennium series films, Godzilla vs. Megaguirus never quite feels comfortable running with its ambition.

A brief introduction reveals an alternate history in which Godzilla was never killed by the oxygen destroyer, and has been regularly attacking Japan since shortly after World War II. The monster’s attacks help to sway Japan into adopting plasma energy as a substitution for nuclear energy, leading to advancements in technology that would have otherwise never happened. We are then introduced to our primary protagonist, a tough-as-nails member of the Japan Self Defense Force (JSDF) named Kiriko Tsujimori. Kiriko holds a serious grudge against Godzilla, who killed her commanding officer while rampaging through Tokyo in 1996, seeking a source of plasma energy. Five years later, Kiriko helps to lead the JSDF’s anti-Godzillla force, which has the unfortunate title of “G-Grasper.”

G-Grasper plans to eliminate Godzilla by using plasma energy launched from a satellite to create a miniature black hole that would suck the monster in, removing him from the planet entirely. While testing the black hole-creating technology, a wormhole is opened that allows a prehistoric dragonfly called a Meganulon to enter the present day, where it lays a large egg before retreating back into the wormhole. With the help of a particularly stupid child, the egg finds its way to the sewers, where it hatches into a swarm of vicious Meganula, who begin attacking Japanese citizens with their deadly claws and tail stingers.

Still focused on eradicating the Godzilla threat, the G-Grasper unit prepares to hit Godzilla with a black hole, but their plan is interrupted when dozens of Meganula (attracted to Godzilla’s nuclear energy) swarm around him and viciously attack, draining his nuclear energy with their stingers. After being repelled, the surviving Meganula deposit Godzilla’s stolen nuclear energy into a gestating Meganulon that is evolving into a giant-sized queen Meganulon. The queen, referred to as Megaguirus, awakens and flies through the city to feed on the closest nuclear energy source, which happens to be Godzilla.

In directing Godzilla and Megaguirus’ climactic battle, Masaaki Tezuka makes some bold stylistic decisions that aren’t always successful. While 70’s-style freeze-frames are used to great effect, shots of Godzilla (from Megaguirus’ perspective) moving at a drastically reduced frame rate look distractingly silly. Speaking of silliness, this film has the most slapstick in the series since the cheesefests of the 70’s. Some of the slapstick moments (Godzilla slapping himself with his tail to swat away attacking Meganula, for example) are genuinely funny, while others (Godzilla leaping high into the air to perform a body slam) are truly embarrassing. When not indulging himself with monster pratfalls, Tezuka infuses the action sequences with palpable ferocity, and you can sense the enthusiasm in his direction.

Godzilla vs. Megaguirus is widely considered to be one of the weakest films of the Millennium series, and when looking at the flaws on paper, it’s easy to see why. There are tonal inconsistencies throughout the film, and it can never seem to decide who the primary protagonist is. There is a large amount of CGI, and as was the case with Godzilla 2000, it’s not very well integrated into the film. Megaguirus is a rather bland kaiju that bears more than a passing resemblance to Battra from 1992’s Godzilla vs. Mothra. And yet, despite all these flaws, I find Godzilla vs. Megaguirus to be worth more than the sum of its parts.

Masaaki Tezuka would return to direct two more Godzilla films, and it’s clear when watching his later work that he learned a lot while making Godzilla vs. Megaguirus. His first attempt at directing Godzilla didn’t result in one of the more memorable films in the series, but it’s far from the bad film that many Godzilla fans make it out to be. It deserves credit for its brisk pacing, occasionally brutal fight moments, and for having a strong and relatable female protagonist. Godzilla 2000 provided a solid reboot for the series, and while Godzillavs. Megaguirus does little to move things forward, it will provide a couple hours of entertaining monster action to all but the most jaded of kaiju fans.

Fun Fact: The Meganula first appeared in the 1956 film Rodan