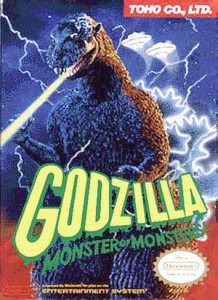 It’s pretty obvious that I have a lot of fondness for Godzilla movies. Growing up, I just couldn’t get enough of the big green guy, and my adoration of his cinematic exploits extended to his licensed video games as well.  As anyone who grew up playing video games in the 80’s and early 90’s can attest, beggars can’t be choosers, and I certainly squeezed out as many hours of entertainment as I could out of the few Godzilla games we unfortunate Americans were able to get a hold of. While more (and better) Godzilla games were released solely in Japan, I will focus mostly on the games that made it overseas. 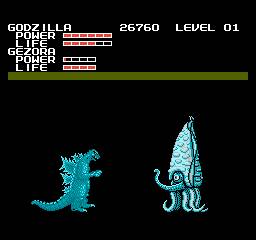 What a title, huh? Is it a play on “Jesus Christ, King of Kings”? It’s quite possible, since Godzilla does play the role of savior of mankind in this mid-era NES game. After some introductory exposition with the absolute slowest text crawl of all-time, you take control of Godzilla and Mothra, who journey across the galaxy to defeat evil intergalactic kaiju and their alien allies. The hexagonal tiles scattered about each planet’s map give the deceptive impression that this is a turn-based strategy game when it’s really a rather straightforward action game. You simply move Godzilla and Mothra from point A to point B, occasionally encountering enemy monsters, moving on to the next planet after you destroy the enemy base.

You encounter fan favorite monsters such as… Gezora, and… Moguera..? Wait a second – who are these guys? Gezora is a giant squid who only appeared in the obscure film Space Amoeba, and while Moguera would later go on to appear in Godzilla vs. Space Godzilla, he had not appeared in any Godzilla film when this game was released. Toho was “generous” enough to allow some of Godzilla’s more iconic foes, such as King Ghidorah and Mechagodzilla, to appear as well, but it’s odd that the game isn’t a “who’s who” of recognizable kaiju. At least all of the monsters are represented with impressively large and well-animated sprites.

You spend most of the game walking (or flying) from left to right, swatting down enemy jets and stomping on anything in your way. Godzilla is a much more competent fighter than Mothra, but lacks her evasive abilities. While it might seem like a good idea to avoid combat as much as possible and simply get to the end of each stage, the only way to boost your monsters’ abilities is to utterly destroy your enemies. You might as well take on all the enemy kaiju since it’s easy to  beat them using cheesy tactics. It’s funny that Godzilla and Mothra are presented as heroic defenders of Earth, because it sure feels like they’re indiscriminately leaving a trail of death and destruction as they make their way from planet to planet.

Rating: 4 (out of 7) – It’s not that impressive by today’s standards, but Godzilla: Monster of Monsters was good enough to distract a young Mr Alarm from the fact that no new Godzilla movies were making their way stateside. *sob* 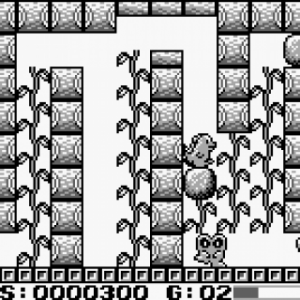 Godzilla’s first appearance on Nintendo’s Gameboy is one of the strangest games to feature the radioactive dinosaur. It’s a cutesy action-puzzle game that revolves around pushing boulders in a specific order while fending off enemy monsters. All of the monsters are presented as squat, “chibi” sprites, and Godzilla’s sole attack is a comically oversized human fist that easily knocks out most enemies.

The game’s appropriately cheerful graphics and catchy music make it seem like a great choice for a very young Godzilla fan, but the level of difficulty is deceptively high. Heck, without an instruction booklet, it might even be difficult for an adult to figure out how to clear the very first level! Your objective in each level is to destroy every boulder, but you have to cleverly maneuver some boulders around the screen in order to gain access to others. One wrong decision will leave you with no other option than to restart the level and lose one life, and the level of frustration ramps up quickly.

Once you figure out how the game works, it’s mildly entertaining to play in short spurts. The movie series’ most popular monsters are recognizable, even in their chibi form, and it’s nice to see a Godzilla game that is ostensibly skewed to younger players. The game is challenging and highly demanding, but completing a difficult level can be very satisfying. I would regard this game much more highly if it had some sort of save feature, but sadly, your progress is lost once you turn the power off if playing with a cartridge.

Rating: 3 (out of 7) – Don’t let the cute graphics and music fool you; this game will test your mental abilities and patience more than most. 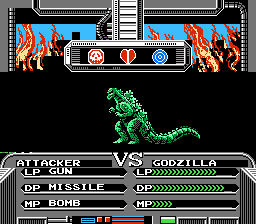 A more accurate subtitle would have been “War Against the Monsters” because you spend most of the game attacking monsters with the Japan Self-Defense Force’s next-to-useless weaponry. The boneheaded developers must have thought that kids obsessed with Godzilla watched the movies and fantasized about controlling the tanks and jets that the monsters blow up rather than the monsters themselves. Boy, were they wrong.

Godzilla’s second NES outing is a full-blown turn-based strategy game, which was quite rare on the NES. You choose a scenario, which determines the monsters you will be facing, and slowly, slooooooooooooowly move your units one-by-one toward their own inevitable annihilation. Tanks and jets are just about as ineffective against kaiju in this game as they are in the movies, and you can either whittle away a monster’s (regenerating) health at a snail’s pace, or buy some time until you can deploy a more nefarious weapon, such as the atomic bomb or oxygen destroyer. The atomic bomb is a somewhat bizarre option as a weapon, since its deployment results in an immediate “game over.”

War of the Monsters arrived three years after Monster of Monsters, yet feels like a step back in nearly every regard. The graphics and animation are bland and limited, and the music is simplistic and repetitive. The gameplay doesn’t fare much better. It takes forever to select and move each unit, and the game does absolutely nothing to help speed things along. This game also follows the trend of most early console strategy games of allowing the player to make very few mistakes in their decisions. Did you move some of your troops in the wrong direction early on? Sorry – now you have no chance of winning, but won’t realize it until 20 minutes later!

This game is both mind-numbingly tedious and punishingly difficult – a losing combination for sure. The appeal of a Godzilla video game is in being able to play as the monsters, and even then a slow-paced strategy game is a poor choice of genre. It might not be the absolute worst Godzilla game ever made, but it’s absolutely the most off-target.

Godzilla video games clearly got off to a solid start before losing their way. Still, as big a mess as Godzilla 2 is, it’s nowhere near as bad as many other NES games based on licensed properties, such as LJN’s abysmal Uncanny X-Men game. There was plenty of room for improvement after the first wave of Godzilla games, but that doesn’t mean that developers tasked with making them were finished experimenting with odd genres. Check back next week for reviews of Godzilla’s Super NES and GameCube games!